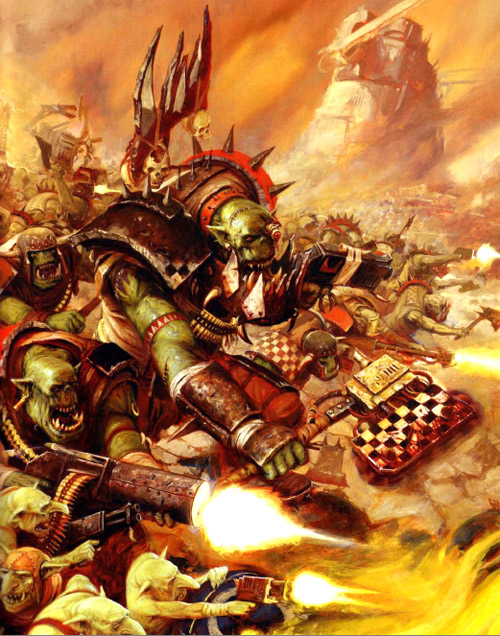 Zack: Space Orks have an elaborate mythology in 40K involving latent psychic powers, fungal reproduction, social order, and technology. Don't worry about it though, it's all just an effort to disguise that these are the same orks in every other fantasy game or book or movie ever in history. They're also the comic relief.

Steve: They think that if they paint a truck red it goes faster.

Zack: Orks have a unique strategy in 40K. They yell, "Waaaagh!" and charge at the enemy while shooting their guns. Compare that to the common Space Marine strategy of yelling, "For the Emperor!" and shooting guns while running at the enemy.

Steve: 38,000 years in the future pretty much everybody battle is decided by hand to hand combat.

Zack: "Yeah, we flew our space church across 500 light years to get to this planet taken over by the orks. Now we're going to drop from orbit in buckets and run out and shoot pistols and hit people in the head with chainsaws. Ultramarines!"

Steve: How interesting would the game be if they just shot everything from space?

Zack: Maybe there wouldn't be war all the time if somebody thought about climbing up a tree with a varmint rifle and shooting an ork from a couple hundred yards.

Steve: That sure sounds like a real fun game, Milton Bradley.