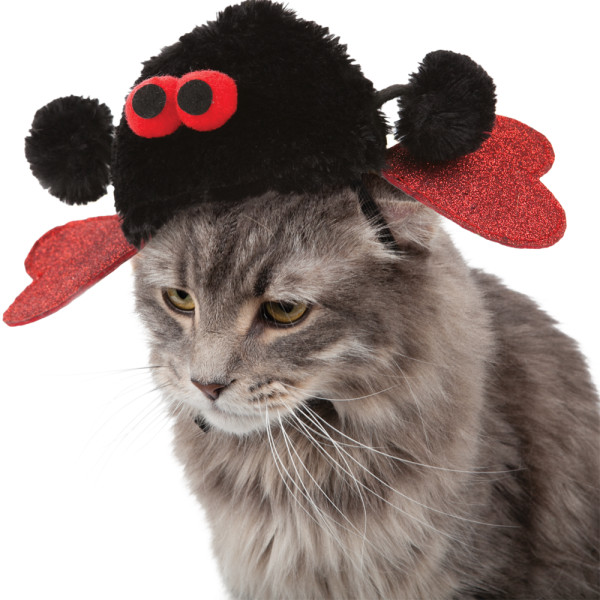 Dr. Thorpenstein: If you're going to put your cat through the misery of dressing it up in a costume, I feel like you at least owe it to the poor animal to dress it up as something anyone on earth might have a chance of recognizing.

Zackula: If cats ever lost the millennia long war against dogs this is what the survivors would be forced to wear.

Dr. Thorpenstein: Yeah, this couldn't be anything but a punishment/humiliation hat. "Hey, what's your cat dressed up as?" "I don't give a shit. I'm making my cat wear that hat because my cat sucks."

Zackula: The dog's pleasure barge arrives and the cats are marched off with stickers all over their bodies and their ladybug shame helmets on. Jeering dogs waving velcro and mouse fishing poles at the defeated cats.

Dr. Thorpenstein: I know we've made jokes about these cats looking miserable, but this poor cat's expression is really getting to me.

Dr. Thorpenstein: This one is too much. This cat has a face like, "Man, I really miss that lab where they used to do medical experiments on me."

Zackula: Please just test some makeup on me. The eye stuff. My body is ready for rabies.

Dr. Thorpenstein: If a cat somehow gets demoted from its vivisection job, this is where it winds up.

Zackula: The other cats whisper about the fate of their poor friend who was wheeled off to the costume division.

Zackula: "I heard they're making him wear it for hours. They're using it as a restraint."