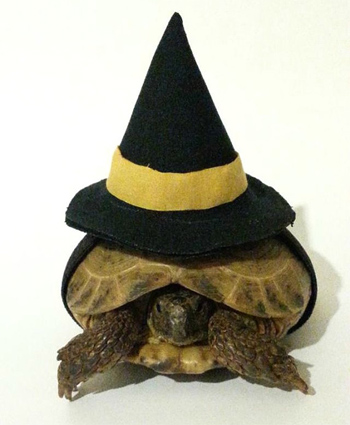 Zackula: At the opposite end of the spectrum to cats when it comes to Halloween costumes: turtles.


Zackula: It's not that they don't care, they don't even notice you putting a costume on them.

Dr. Thorpenstein: Turtles are the only animals that are so OK with wearing costumes that they decided to do it all the time.

Dr. Thorpenstein: They got so psyched about dressing up as rocks every Halloween that evolution eventually made it permanent.

Zackula: Halloween is just a theory. I believe that we are all created wearing the costume god intended.

Dr. Thorpenstein: One Halloween some lizard decided to dress up as Sexy Rock and all the other lizards were so into it that they decided they'd only have sex with lizards dressed as Sexy Rock from then on, and that's how natural selection works.

Zackula: Yeah, okay, that checks out.