Zackula: Creeeeeeeeaaaaak! Eeheeheeheehee! You never should have come into the Something Awful graveyard on Halloween! Now look who you've awakened!

Dr. Thorpenstein: Booooooooo! Happy Spooooookyween, boys and ghouls! This year, we bring you the most terrifying edition of Halloween SWAT in history: cat costumes! They may not look too spooky to us, but every cat you see photographed in a stupid hat feels more panic and horror in the three seconds the hat stays on its head than you could possibly experience in a combined lifetime of your worst nightmares.

Zackula: I sure hope you're not feline scared! It's only going to get worse from here! 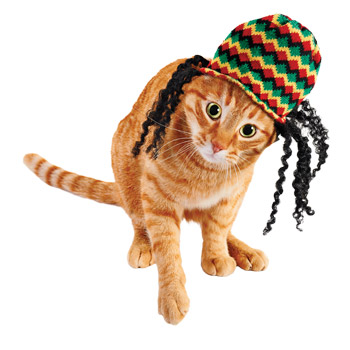 Dr. Thorpenstein: Wow, I'm really surprised that they got this cat to convey the laid-back reggae lifestyle so perfectly.

Zackula: Clearly the cat physiology has not fully adapted to being this relaxed.

Dr. Thorpenstein: If you know a lot about cats, you'll know that when they're feeling especially "irie," they often get a look of wild-eyed panic and contort their bodies so it looks like they're trying to back out of a hat.

Zackula: Nothing gets them relaxed quite like this other than Haile Selassie, tropical island breezes, strangers, loud fireworks, squirt bottles and loops of tape on counter tops.

Dr. Thorpenstein: They probably spent hours taking photos of this cat in this reggae costume looking for that PERFECT shot of laid-back cat relaxation, so it's cool that out of the hundreds and hundreds of shots they took they managed to pick out one where the cat looked so perfectly, completely relaxed.

Dr. Thorpenstein: Once they took this one, they were probably like, "Wow, great work, everyone. We got it. This one's in the bag. This is as relaxed as this cat could possibly look."

Zackula: He was probably too blurry in most of them because he was daggering, which is where a yowling cat climbs a human body using its dagger-like claws.

Zackula: Another possibility is that they threw the hat at the cat's head a thousand times and just went with the one picture where the hat hit the cat's head at just the right angle that it almost looks like he is wearing it.

Dr. Thorpenstein: That might have been necessary in this case; sometimes reggae cats spend a lot of time hissing and spitting and struggling to tear off their hats because they become very concerned about Babylon.

Zackula: Babylon represented by a knitted reggae octopus like a hairy D&D dice bag flying around a photo stage terrifying a cat for six hours.

Dr. Thorpenstein: I'm not sure I'm buying the dreads. It kind of looks like MTV's Sway became a Hasidic Jew.

Zackula: Also is it racist because I am pretty sure cats are all Asian regardless of color. I'd have to look at my animal, to human, to mythical creature conversion table.

Zackula: Oh, that's right, the cats are gypsies, the elves are the Asians, the lizard people are Mexicans, and the black people start with poison resistance.