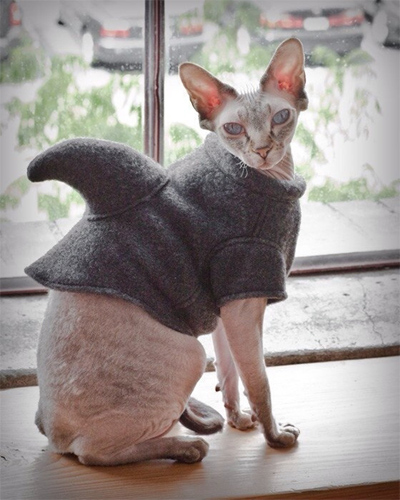 Zackula: Whoever that cat is looking at is probably close to tears from that withering contempt.

Dr. Thorpenstein: I think I'm already more scared of those hairless cats than I am of sharks anyway.

Dr. Thorpenstein: I'll probably never see a shark in my life, but I'm in constant danger of going to some weird vegan friend's house and having one of those fucking things jump at me.

Dr. Thorpenstein: Don't ask why I associate those cats with veganism. Maybe it's some kind of "willful rejection of basic pleasures" thing?

Zackula: Totally makes sense that the same people who would try to convince you that a seitan Reuben with Swiss cheese made out of almonds is delicious would also be cool with owning a pet that looks like it should be freaking out a guy holding a motion tracker.

Zackula: Let's not be too harsh though, hairless cats are truly a blessing for people with cat allergies. They allow those people to be disliked by cats in exactly the same way as the rest of us.

Dr. Thorpenstein: That's a good point. If you have really bad allergies, at least you can get one of these hairless cats and look at it every day and go, "Hey, you know what? My life is just awful."

Dr. Thorpenstein: A hairless cat is a reminder that you're not allowed to be happy.

Zackula: Waking up to a hairless cat in your bed is like starting each day in a Stuart Gordon movie.

Zackula: "Ohhhh god, I gave birth to another ropy horror baby while I was asleep."

Dr. Thorpenstein: If David Cronenberg designed a cat, it probably wouldn't be a glorious longhaired persian.

Zackula: Vegan woman walks into pet store. "Yes, my son has allergies, so I would like the body horror cat to take home to him."

Dr. Thorpenstein: You don't have to go to the pet store, just pour some bug semen on your typewriter and it'll turn into one of these.