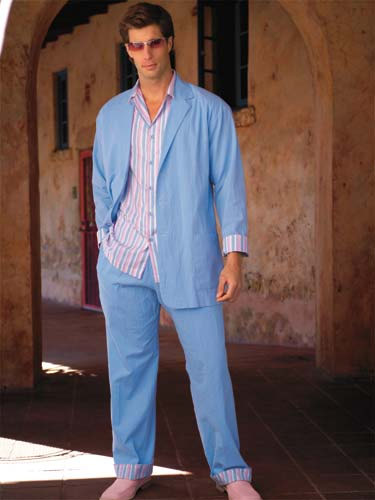 Zack:If you are wearing pink shoes then you definitely need to be slapped.

Dr. Thorpe:This guy is just all out of whack. Are his shoes made out of silly putty?

Zack:Maybe he was just walking through a room covered with funny pages and he wanted to take some Geech along for the road.

Dr. Thorpe:His stance is so awkward, it looks like he's picking a wedgie out of his butt.

Zack:That outfit makes me think he's getting ready to head to the OR in some really unpleasant hospital. Like the kind where a Columbian doctor will install a skunk's tail on your back.

Dr. Thorpe:The pants cuffs that match his shirt are probably the single worst fashion idea I have ever seen in my life. It makes the whole ensemble totally bewildering, like maybe the shirt has extra sleeves that go over his legs under his pants.

Zack:You just keep imagining how every article can be reversed until you're picturing his internal organs hanging from his muscle tissue and they're all different pastel colors.

Dr. Thorpe:You know those TV shows where people send in their photos and they give plastic surgery to people who are really hideous and really really need it? There should be a TV show where people send in their photos if they're complete dinks like this guy, and the producers send over a camera crew and just punch the guy really hard in the gut because he deserves it so very, very much.

Zack:I think this guy looks like the last surviving member of a boy band after a terrible wardrobe accident. Now he's in Costa Rica looking for three modestly talented kids who can be inoculated and washed and taught to gyrate and flap their mouths into headsets on the stages of stadiums around the world.

Dr. Thorpe:Yeah, he had to shave off his razor-thin facial hair and go incognito for a while.

Zack:You can just bet his name is like "Ernest Leibowitz" but you can call him "Troy" or "Chuzz." No wait, I think Chuzz was the blonde guy.

Dr. Thorpe:I bet he goes even more avant-garde than that, something like "Helm" or "Cactus."

Zack:No, you're wrong. That's Troy. I remember him because this dude told me Troy had to have his stomach pumped and they recovered 140 gallons of semen from the other members of Crazy House.

Dr. Thorpe:Wait, Crazy Horse was Neil Young's band, and somehow this guy doesn't look like the type. Although the harmonies on "Powderfinger" were a little fruity.

Zack:Crazy House, but I think Neil Young would sit in with four hillbillies blowing hoot-jugs.