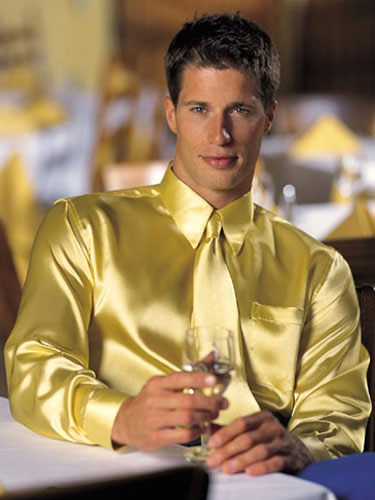 Dr. Thorpe:When God comes back to Earth, surely he will be a gigantic golden man.

Zack:Why do I get the feeling that his wine glass is full of Vagisil?

Zack:The one positive thing I can say about the shirt and tie is that they might just save his life when he's bicycling at night.

Zack:As long as Powers Boothe isn't the one driving the car. Then he'll just see the guy pausing to squirt Summer's Eve in his mouth and slam his foot on the gas and not let up until the guy is a gold-flecked smear on the guardrail.

Dr. Thorpe:Yeah, Powers knows that those gold fashion sense genes need to be wiped off the planet for good.

Zack:He has a sort of radar or echolocation to seek this crap out. Even if you dazzle him with sequins or deafen him with your colors he's going to sense you like Rutger Hauer in Blind Fury and your pirate shirt ass is cut in half.

Zack:Come to think of it, this is exactly the sort of shirt Steven Seagal would wear. Just add some turquoise Indian bullshit and a squinty look for the model and you could sell a hundred to him alone. He'd be looking off into the distance and whispering something about Great Crow and Powers Boothe would just upend a bag of spiders into his mouth.

Dr. Thorpe:I think Jean Claude Van Damme actually wore shirts almost exactly like that when he was playing the "dapper" twin in "Double Impact." Which, unlike Sudden Death, was a fucking terrible movie. Because of the shirts, mostly.

Zack:Yeah, but it was a wet dream for nightclub owners who would fantasize about not one but two simultaneous Jean Claude Van Damme lawsuits.