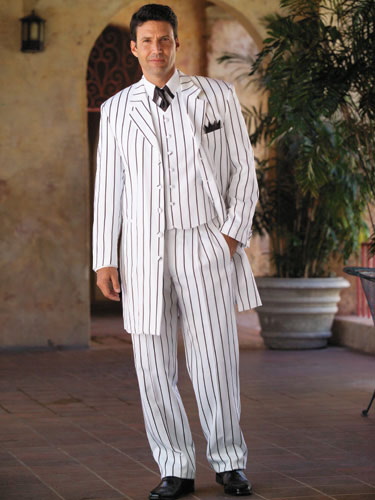 Dr. Thorpe:It's impossible to make a suit look any more like pajamas than that. The last suit looked a lot like pajamas, but this one blows it out of the water. It makes me yawn just looking at it.

Zack:If vertical stripes are slimming I think this suit can teleport the wearer into two dimensional space.

Dr. Thorpe:I think it's a lot more likely to transport him into Captain Nemo's Sandman Slumberland Sleepworld. Because it's fucking PAJAMAS with a TIE.

Zack:Gentleman's pajamas: for the discerning napper. You know he's going to dream about turn of the century baseball games. Then at the end of his dream Ty Cobb will appear and whip a negro child with a car antenna.

Dr. Thorpe:Yeah, once you hit the upper reaches of society your pajamas had better have a vest, or your yacht might as well be driftwood.

Zack:If you don't stuff silk into your breast pocket then head down to steerage and eat cat food out of a pot with the Irish. I think this guy really needs a wallet chain. He definitely listens to one of those inane classical music cover albums of Big Bad Voodoo Daddy or Squirrel Nut Zippers or something equally dire. "Innnnn the afterlife, you'll be hea…head…yawn…zzzzzz."

Dr. Thorpe:Yes, there are certainly zootish qualities to his pajama suit. He looks strangely out of place in his Spanish villa though.

Zack:I think that's the same Spanish villa the last guy was at. Maybe this is a face off for the prime nap space at Senor Snoreingtons Hacienda El Sleepo.

Dr. Thorpe:That tile floor and adobe and everything is much more suited to a guy like Powers Boothe in "Extreme Prejudice," and guys like that wear classy white suits, not this pinstriped pajama bullshit.

Zack:Wasn't Powers Boothe in that Jim Jones movie? Maybe this guy and the last guy belong to some nap cult that has been uprooted and moved to Guyana.

Dr. Thorpe:Fuck that, Powers Boothe would kick this guy's ass on sight. He wouldn't have to poison him with Kool Aid or anything, pow, he would be on the floor instantly.

Zack:Oh shit, I just looked at his IMDB profile. He was the downed fighter pilot in Red Dawn. Powers Boothe would Wolverine the shit out of these limp-wristed commies.

Dr. Thorpe:Yeah, seriously, watch every single movie with Powers Boothe in it in history. He's an acting genius of the highest calibur.

Zack:Welcome back to the stage of history!