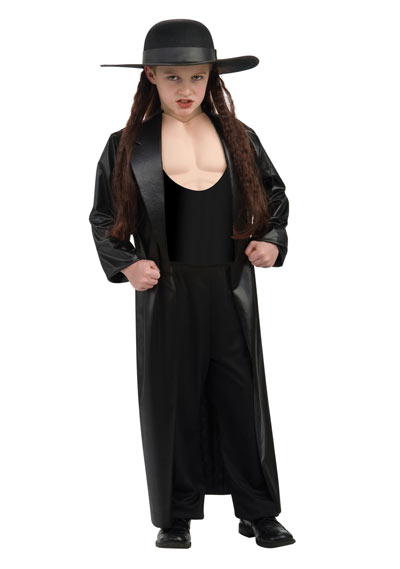 Dr. Thorpenstein: I don't really know anything about wrestling, but is this guy even still alive? Is there any kid in the world who remembers him?

Dr. Thorpenstein: Even if one kid remembers him enough to dress like him, won't all the other kids in school just think he's dressed like a Scary Butch Cleavage Witch?

Zackula: If you've ever been to Amish country there's this weird moment where the world shifts and all the costumes and behaviors of the Amish become the norm. You're the stranger in their culture. Sort of like being in the Logan's Run city.

Zackula: Imagine going to a reclusive community and everyone there, especially all the children, look like this. And they're all cutting promos and selling homemade jelly, but it's weird jelly, like thistle and marrow jelly.

Dr. Thorpenstein: I bet the Amish are all super buff out there from milking cows and shit, so they probably do look like this.

Dr. Thorpenstein: A cow's udders are like a tiny little rubbery Bowflex.

Zackula: Rumspringa is when they cut loose and head to the Power Plant to see if they have what it takes to compete in the top tiers of sports entertainment. If not, back to the milking.

Zackula: Put the Tombstone Piledriver on those voles that have been eating their way through mother's garden.

Dr. Thorpenstein: I think an Amish guy would be a great pro wrestler gimmick. He just stands there and stoically takes all the abuse for a while until his opponent finally pushes him over the edge and drives him to violence.

Zackula: It looks as if that top rope stinger has really put cracks in the bedrock of Josiah's pacifism!

Dr. Thorpenstein: There's a great little built-in play about God and morality and the nature of violence in every single match.

Zackula: He could tease it all through the match. Being beat over and over and then he starts shaking and his eyes roll back in his head and he raises a hand to chest-slap his opponent, but "OH MAH GOD JOSIAH IS PRAYING ON THAT! HE'S PRAYING AND GAWD IS LENDING HIM STRENGTH TO STAND RESOLUTE!" and he puts his hand down and takes more beating.

Dr. Thorpenstein: If he's a really buff six-year-old Amish child, that adds yet another layer of drama. Because then his opponent will also be struggling with the complicated ethical issues. Like "Am I really going to hit this child?" and his manager is yelling at him from ringside to kill the kid.

Zackula: An even worse thought with this costume is that what if the kid has no idea who the Undertaker is and his parents force him into this costume?

Dr. Thorpenstein: Yeah, if you don't know the character, it's a pretty tough look to explain.

Zackula: But none of it will ever be enough to explain away the cleavage. And also if your school has a costume contest you're pretty much ruling yourself out from the start, because no adults are picking a little boy with tits showing.

Dr. Thorpenstein: I don't know, man. It's a strange world out there. There's no accounting for taste.

Dr. Thorpenstein: Yeah, that homemade Darth Vader costume is pretty amazing, but what about the Amish Transvestite? It's really just... ringing my bell, for some reason."

Dr. Thorpenstein: I think voting for this in a child costume contest is definitely grounds for dismissal and possibly investigation.

Dr. Thorpenstein: "Fine, so I hired a child cop stripper. What are you gonna do about it? The union will sue this goddamn district into bankruptcy."

Zackula: "How dare you embarrass me by hauling me into your office like this? I have worked here NINE.WEEKS. Good day!"