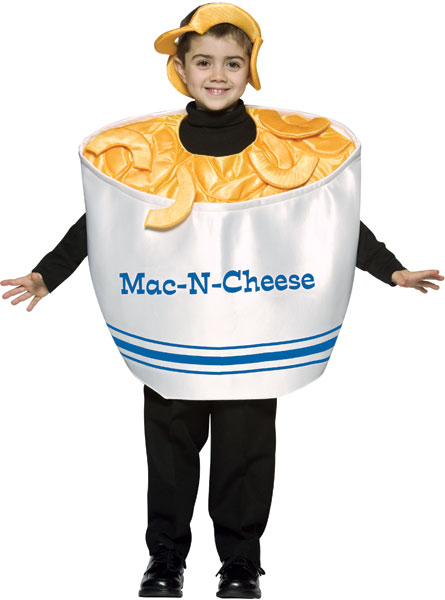 Zackula: It is super goddamn annoying that the "Mac-N-Cheese" text does not curve with the illusory surface of the bowl.

Dr. Thorpenstein: It's really breaking the illusion of this otherwise impeccably crafted costume.

Zackula: I mean if they're not even going to try - and obviously they aren't - then they should have just left it blank.

Zackula: "Mommy! Mommy! Can I be a bowl of Macaroni this year for Halloween?" "Why that's ridiculous, Timmy, there would never be...ZOOGSTER YOU DID IT AGAIN!!"

Zackula: In America we don't even bother dressing up as monsters and demons anymore. We just dress up as food. Everything is slowly moving towards food, always, like the universe declines into entropic chaos, so too does America become all food.

Zackula: I'd like to see the 2009 CDC figures on goblins before I agree with you.

Dr. Thorpenstein: I have some kind of gut-level disgust reaction to the thought of a child dressed in a savory food costume walking around collecting chocolate.

Dr. Thorpenstein: It's like a guy in a Smiths t-shirt buying a Metallica CD. It just doesn't makes sense.

Zackula: Yeah, I get that too. A little bit of toothpaste and orange juice feel to it. Maybe a little too much like cannibalism.

Dr. Thorpenstein: Now I'm thinking about it a little too hard and getting even more pissed off and grossed out and I just want to stop this Fashion SWAT right here and go to bed or something.

Zackula: You know what would be really good right now? A bowl of mac and cheese filled with half-melted mini Twix.

Zackula: Maybe you would feel better if we moved on.

Dr. Thorpenstein: Let's do that, this is really making me lose my appetite for the big bowl of beef strew and grape Tootsie Pops I'm eating.