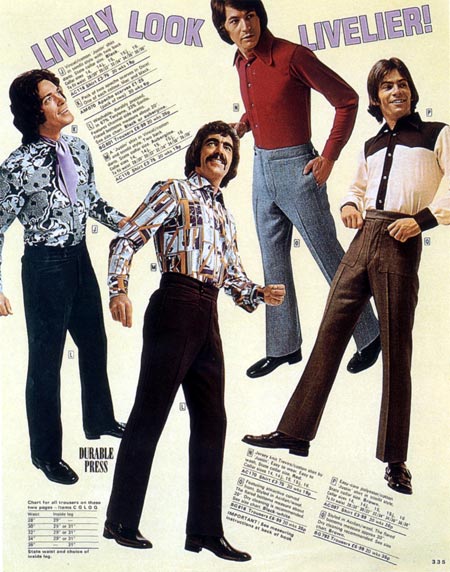 Dr. Thorpe:The Bay City Rollers are all grown up, and they've got some serious shit to attend to.

Zack:Were men ever that skinny? I mean human men, of course.

Dr. Thorpe:You'd think that guys that skinny would at least consider wearing belts. That's why the two on the right have their hands in their pockets. If they took them out, their pants would slide right down their nonexistent hips.

Zack:And the pleats, my God they could slice tomatoes on those pleats.

Dr. Thorpe:You could grate carrots on those shirt patterns, too.

Zack:Yeah, if you want your salads to look like a Pollock painting.

Dr. Thorpe:I wonder if it's just our retrospective gaze that makes all this masculine camaraderie look like homoerotic horseplay.

Zack:The guy in the middle looks like an action figure, look at his action pose. Pete Gobottom, adventurer at large. Do you think MANATCA could take these guys in a fight? I mean they look lively livelier, but MANATCA, come on.

Dr. Thorpe:The guy on the left is definitely thinking about the American Dream.

Dr. Thorpe:They may look a little fruity to modern audiences, but each and every one of those men can swing an axe. I guarantee it. They've got real American grit under all that polyester.

Zack:Three of them probably went on to become senators or at least in a band called "The Senators."

Dr. Thorpe:I wonder where all those clothes went? Are they all on hipsters now? You'd think they'd all be sitting unused in Salvation Army shops. But you never see a hobo dressed like that. God knows you want to.

Zack:Hobos can't keep pleats that crisp. Plus they need their hands out of their pockets to fend off shivs. Maybe if you look close enough you'll eventually see a guy with a bindle and a shopping cart wearing some of those slacks with a rope tied around his waist.

Dr. Thorpe:More of a belt than these dudes can muster, at least.