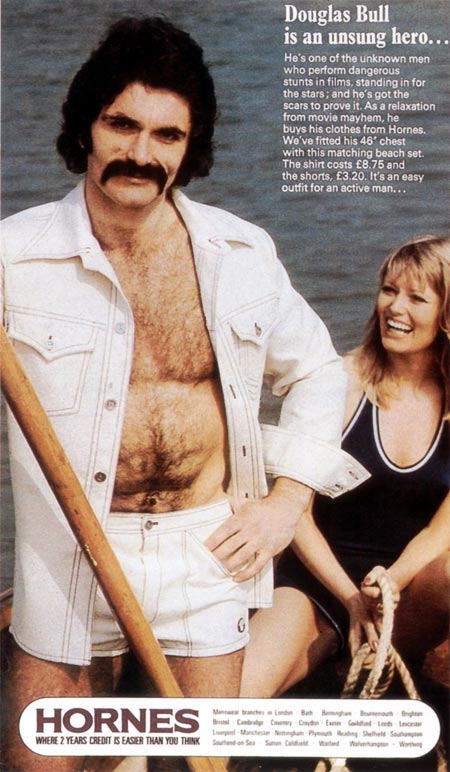 Zack:Douglas Bull is the unsung hero of the movie Zardoz.

Dr. Thorpe:She is laughing at him.

Zack:Once again the woman must tend to the knots.

Zack:He has more hair on his stomach than most men these days have on their entire bodies. He should shave that shit and sell it to the cancer hair people. Some kid could be walking around in three weeks with a fat Englishman's gut hair covering up his chemo.

Dr. Thorpe:And if he buttoned his shirt, it would look like he wasn't wearing pants, which is NOT a good look for him. Although it worked for Ron Jeremy, who is not altogether unlike this guy. You could make a winter coat out of his mustache alone.

Zack:I don't think that's a mustache, I think a sea bat is hanging from his nose. The woman is laughing at its folly. For they will dine and dine well on fresh sea bat tonight!

Dr. Thorpe:As soon as she lassoes it.

Dr. Thorpe:His job is to stand suggestively by a pole and look swarthy and rugged until wildlife flocks to his musky odor.

Dr. Thorpe:I want you to imagine just hugging him and burying your face in his chest and taking a deep, deep drag of his manly aroma. He probably reeks of Brut, sweat, and patriarchal oppression.

Zack:I passed out drunk on a bearskin rug once at a party. I think I know what it's like. Much as it was that time I would probably wake up with vomit crusted around my mouth.

Dr. Thorpe:Okay, now imagine lying with him, naked and luxuriant, on a persian rug as the sunshine streams in on your bare bodies from the windows of your Manhattan studio. And imagine him whispering in your ear that he will always be there for you.

Zack:I think I'm going to take a rain check on that one. I've got an interview in 20 minutes with The MANATCA.

Dr. Thorpe:Better starch up that collar and prepare for a fight. You'll probably have to take down some of Etro's thugs to test your mettle.

Zack:The MANATCA demands two things; punctuality and underwear that looks like a bathing suit from 1908.

Dr. Thorpe:And a woman to handle your ropes.