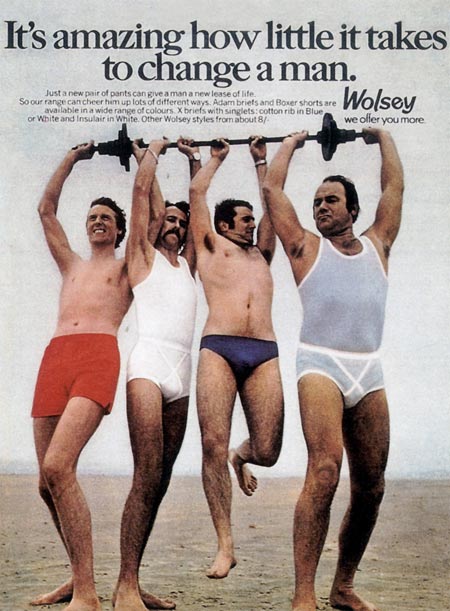 Dr. Thorpe:You know, I'm honestly not quite sure I get the joke.

Zack:Neither do I. Maybe it's not an ad at all, maybe it's hate propaganda against short people. "The Shorts try to drag us down, but we cannot be stopped. The beach is ours for 1000 years."

Dr. Thorpe:I just noticed that it says "colour," but when you look closely, that's not the only thing that betrays it as British. For example, look at the grey sky and the pale, fleshy models. And the guy on the right looks like he'd beat you up in the "pub" for being a "nancy."

Zack:I don't know about that, the guy on the right looks like a Comanche brave.

Dr. Thorpe:Maybe they recruited him from America because they already used up the only other two men above 5'9" in England.

Dr. Thorpe:Absolutely. They only had one model. The guy on the left. The other three are just random slobs from around town. I mean "blokes from round the way." They found them at their "local." Or maybe "standing in the dole queueueue."

Zack:They just pulled up next to some watering hole in a shitburg with some exceedingly British name like "West Hoomply" and opened the door on their lorry and said "mate, put down that pint and get your kit off, we're shootin' a picture fer the daily over at the peat bog."

Dr. Thorpe:I watched this PBS documentary about the English language's history, and the thing that sticks out in my mind is how the early inhabitants of England were always just slitting each others throats and throwing each other in bogs. The national economy apparently revolved around it or something.

Zack:Then every fifty years or so they would either get overrun by some version of Vikings or decide to go kick around the Francs. "Blimey, me slittin' arm is tired, let's go kick in some French shite."

Dr. Thorpe:Exactly. What all this has to do with English undergarments I have no idea, but let's just go on a little flight of fancy and imagine that these gentlemen are about to get overrun by Vikings and/or thrown in bogs.

Zack:I would say that's where they belong.

Dr. Thorpe:This is back when a nice manly bulge was reserved only for members of the Rolling Stones. Bulges on non-rockers were considered unseemly in those days.

Zack:The slightest hint of genitals sent people screaming through the streets and burned down churches.