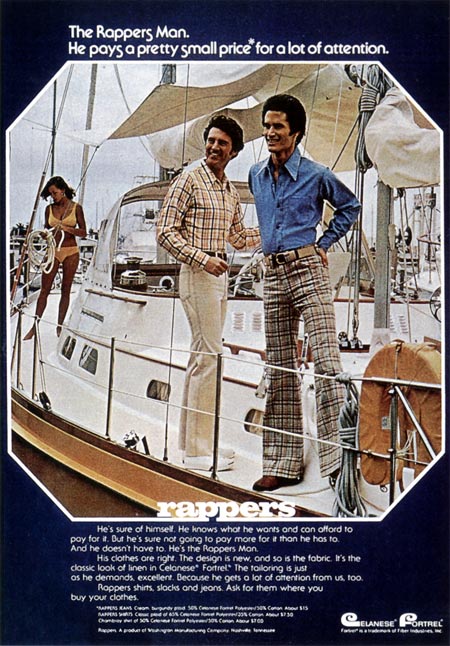 Dr. Thorpe:Okay, these motherfuckers is definitely not "rappers." Imagine the wack rhymes these cats would spit. It's a damn embarrassment.

Zack:Oh, come on now, this was long before rhyming was invented. Back then they just pounded on drums and danced around bon fires.

Dr. Thorpe:Zack, I'm surprised that you'd go for the "racial" angle on this, especially in such an insensitive way. Are you saying that just because these guys are white, they were doing "tribal rituals" and chucking spears at each other?

Zack:I suppose the alternative is that they were slitting each other's throats and getting tossed into bogs.

Zack:"Women will attend to yachting duties, men will gather at the ship's fore section for a 9 minute smiling break." Where do you think they're sailing today?

Zack:I think they're headed for the Isle of Plaid.

Dr. Thorpe:Clearly we can't use that joke, because it's too easy.

Zack:Obviously, so where do you really think they are sailing today?

Dr. Thorpe:Well, I actually really think they're sailing to the Isle of Plaid, honestly. I mean, there's no getting around that one.

Zack:Yeah, I can't really think of a better destination for them. Maybe the Volcano of Plaid.

Zack:Meanwhile, back on the ship, the woman in the bikini will tend to their knots. It's almost as if they're conspiring against her.

Dr. Thorpe:Hey, I just thought of this: if you switch their shirts, one is tastefully dressed and the other is your schizophrenic uncle's couch.

Zack:I don't think any amount of switching will result in "tastefully dressed", but I do think the other one will smell like spilled Coke and farts.

Dr. Thorpe:Well, I mean that in a relative sense. Blue and tan is classic. But those lapels sort of ward off good taste any way you look at it.

Zack:I wonder how many coins you'll find in him? Not many! You'd be hard pressed to get a needle into one of those pockets.

Dr. Thorpe:But imagine the gigantic medallion you could fit under that huge collar. That would make coins irrelevant. The medallion is your currency.

Zack:Oh, I just had a terrible thought.

Zack:Imagine those shirts combined with the brief 80s trend of a necktie with the collar worn folded up. They'd look like warlock bankers. Dr. Strange meets Burke from "Aliens."

Dr. Thorpe:You have a sick mind, young man. We were just joking around, but I think you just stepped way over the line.