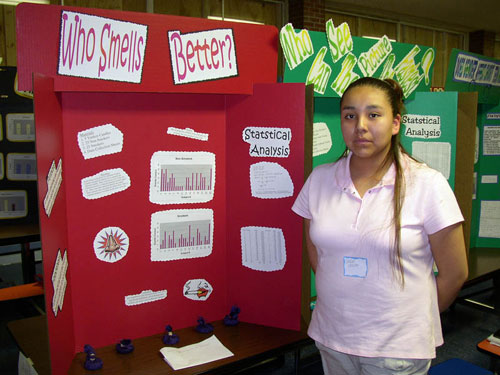 Zack:Oh man, how embarrassing, her display wore the same font to the fair as the display next to her.

Dr. Thorpe:They used the same pinking shears to cut the edges, too. I smell a cheat.

Zack:Maybe they're in some sort of sense-ghetto. The next display in line is "who tastes the sweetest?". Surprisingly it's the loser of the smelling best contest, the Indian restaurant line cook. He tastes just like a curry plate.

Dr. Thorpe:The hobo, predictably, did not fare too well in either of those, nor the "Who Feels the Smoothest?" contest.

Zack:They're still debating the results of "who sounds the most like a bird?". It's down to the male prostitute and the body builder.

Dr. Thorpe:God, look at that poor, earnest girl. She just wants you to approve of the way she smells. Is it so wrong for a lonely, friendless girl to make a science fair project just to fish for compliments about her odor?

Zack:She looks more like she's been working as a drug mule and she's sweating out the last of a busted condom full of cocaine.

Dr. Thorpe:Sure, you can make fun of her, you might be some hotshot who can see the picture the fastest, but can you see her, the girl who's standing right in front of you, the plain, tall girl who's been in love with you since fifth grade and just wants to smell pretty for you?

Dr. Thorpe:Did you even notice that she stole some of her brother's Axe body spray, mixed it with a little Pine Sol, and dabbed it behind her ears?

Zack:She knew it was love from the moment you spotted that fennel seed in the cheese vat from a hundred feet away. Eyes like an eagle, heart like a luchador. But in some "Gift of the Magi" twist of fate, you burned out your scent receptors when a truck full of Camembert overturned in the loading docks.

Dr. Thorpe:And when she finally worked up the courage to kiss you, alas, she accidentally kissed where you'd just been. She was born with a tragic birth defect: she sees slow.

Zack:Now all you smell are the active cultures, forever, burned into your nostrils like a Mario score bar on a projection TV. She wants you to smell the vanilla extract and jasmine she has carefully blended in her lab, but she's just more cheese to you.

Dr. Thorpe:She wound up marrying the cologne salesman, just so she could live among smells.

Zack:He's a slow-seer too. They spend days just trying to look into each other's eyes.