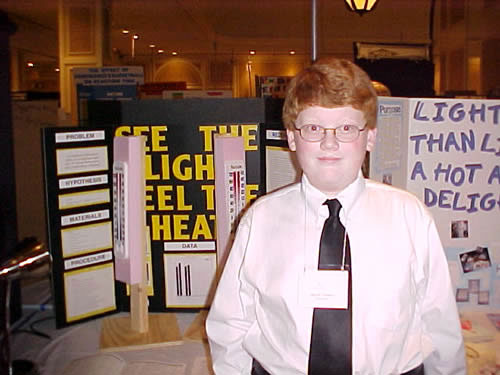 Zack:"Hello, I would like to talk to you about the light and heat of the Lord. In John 4:20 it says-" *door slams*

Dr. Thorpe:This kid is such a televangelist.

Zack:He is going to do some laying of hands when that Girls Gone Wild commercial comes on Comedy Central tonight.

Dr. Thorpe:"Come, brothers, purge your sinful wallet of those wicked dollars, send them now to See The Light Ministries, where we shall purge them of their evil and use them to do the good works of The Lord! And if you have any bacon in your wallet, o brothers of God, send that in too!"

Dr. Thorpe:He's got a face like somebody who's already recovered from scandal. Nothing can touch him now. He got caught picking up six transsexual whores in a hookah bar on Sunset Strip, and all he had to do was cry on television and beg Jesus for forgiveness and the dollars just kept pouring in. He knows he can get away with anything now.

Zack:He looks like something surprised him so much that his eyebrows just flew right up into the air and never came back down.

Zack:You know, we've been going at this from the wrong angle I think. I don't think he's a televangelist at all. That dull outfit and name badge, that hollow enthusiasm, I think he is running a tradeshow. With a name like "See the Light, Feel the Heat" it has to be a counter-terrorism convention.

Zack:"Our solid-state laser system can frag the face off of a Taliban at 5 kilometers. The instant they see the light of the laser they will begin to feel the heat as their blood boils inside their veins, bursting out of their necks and legs in gusts of superheated steam."

Dr. Thorpe:"And check out these patented flashbang grenades for your non-lethal ops. These puppies throw out enough light to blind a bogey from up to 25 yards away, and it'll give 'em a nice sunburn if they're within ten feet or so. Better get to these sweet babies before the Geneva Convention does, because once they do their thing, that eyesight is never coming back."

Zack:"You want to talk about information gathering, this Xenon 900k watt directional lamp on articulated stand is perfect for those interrogations where you want them to sweat it out. Five million candle power will dazzle their vision and blast the moisture right out of their body in seconds. It's illumination so powerful that when you turn it on they say their skeleton casts a shadow. Ain't no law on the books against giving them a reading light, heh heh heh."

Dr. Thorpe:"Heh. This one's a little misleading because they're never actually gonna 'see' the light. Those retinas will be cooked like a Christmas ham before you're even done flipping the switch. But boy howdy, they're gonna feel that heat. Yeah, so I'm only ten, cry me a fuckin' river. Do you want to buy one of these bad boys, or what?"

Zack:"Next week I'm heading to the Pan-Global tradeshow. I have the booth right next to Ratheon. The one with Cartman on the banner. Yeah, here's my card, Cheesypoofs Industries."

Dr. Thorpe:"I've got a mortgage to pay off, a Hummer to bulletproof, and a wife who won't fuck me. I dont' want to hear any of your 'only ten years old' bullshit, because I've been putting up with it all fucking day and I'm about ready to give this microwave eyeboiler a little test drive."

Zack:"Now if you're not going to buy then get the hell out of my face, I've got to pick up my kids from soccer practice."