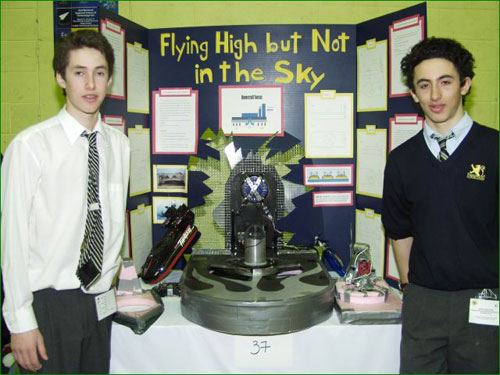 Zack:Before we start on this one, just to clarify: it is about a hovercraft. Made out of weed.

Dr. Thorpe:Yeah, and while you're riding on it, it injects methadrine into your testicles while simultaneously administering a powerful electric shock.

Zack:Your swamp is too small to hotbox with our hovercraft.

Dr. Thorpe:God, I'd love to see a movie about Jerry Reed trying to drive a hovercraft made out of weed across the Everglades with Joe Don Baker and maybe a chimpanzee chasing him.

Dr. Thorpe:I haven't yet decided whether the chimp would be on the side of law enforcement.

Zack:There would be a part where Joe Don Baker is chasing behind Jerry Reed and the hovercraft catches on fire and blows smoke through its fan right into Joe Don Baker's fat face and then his boat starts lifting up into the air and it flies past.

Dr. Thorpe:Yeah, and you just see that chimp grinning like crazy, you know, like they do. And they play that fake "chimp laughing sound" over it, and then Joe Don realizes he's in the air and he's like "OHHHH SHIII..." but the sound of the hovercraft engine sputtering out makes it so you can't hear what he's saying (presumably "shit").

Zack:Then he would have to crash into a) a pile of manure, b) an alligator pit or c) a women's locker room

Dr. Thorpe:I choose C, we've gotta get some tits in this thing or we'll lose 'em in the South.

Zack:I thought it was shiny things like car keys and necklaces for them. Oh no, wait, I'm thinking of babies.

Dr. Thorpe:Hey, babies like tits too, maybe even more than Southerners. Hell, everybody likes them, and when you combine them with Jerry Reed, a monkey, and a hovercraft, you've basically got a line around the block. It's a no-brainer, just like Joe Don Baker.

Zack:You'll have to get some ethnic appeal in there though, maybe replace the monkey with Chris Tucker and have some Mexican guys totally pimp out Jerry Reed's weed hovercraft.

Dr. Thorpe:Yeah, it could even be the guys from Pimp My Ride. Yo, let's go see what Mad Mike's got goin' on with those electronics. "Yo, I heard Jerry Reed really likes Banjos, so I'm making it so when the propeller turn, that shit his banjo strings and plays the song that retard kid plays in Deliverance, you feel me?" *hits banjo strings*

Zack:"Ish, show him how you drop the DVD." "Alright, Jerry, check this out, I got six plasma screens in the back and four in the front. Two on the head rests, two on each visor, one in the glove compartment and one where the rear view mirror is. They all run up off this Blue Ray skrilla right here in the center console and then we got a PS4 custom made, it's two PS2s together so you can play two games at once on the different screens. Now check this..."

Zack:"Yep, Mad Mike made the whole car a bong, try it out." "No waaaaaaaaaay! You guys are so awesome!"

Dr. Thorpe:And then he tries to hug Xzibit and X is like "haha, yo, I ain't feelin' that," and then he looks at the camera as if to indicate that Jerry Reed is crazy.

Zack:And then he gets to show it to his friends and he drives up to this overgrown parking lots full of weeds behind an abandoned bowling alley. He whistles and these deformed loping simian shapes emerge one by one from the tall swamp grass, hooting enthusiastically at his totally pimped ride.

Dr. Thorpe:"The manatees gonna be all over you now, Jerry."