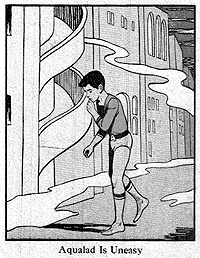 Aqualad is the baby of Aquaman and Mermaid, but he has no fish parts, because his dad is a radioactive man-fish and his mom is just a natural woman-fish. He went down a slide, and now he is sick. He should not be on land by himself. He is not even wearing shoes, or pants. Aquaman will pay for his leisure and neglect. 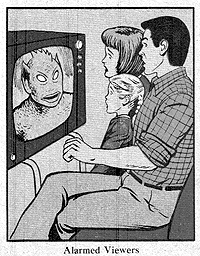 The Strange Creature is making terror for the family by appearing inside its television. When Strange Creatures watch normal people, they aren't even secret-style about it, because the people have no powers. They're fearful and weak, and need protectors. 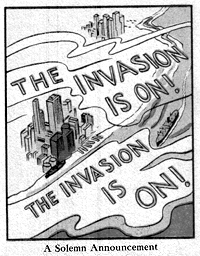 The Strange Creatures made words that read "The Invasion Is On!" by using paint and rocks and magic. They made the letters giant so the aliens can see them from space. 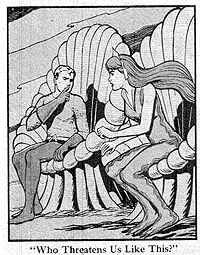 Mermaid is mad. She does not think Aquaman is a good father, letting Aqualad roam alone on land where there's slides and smoke. Aquaman silences her with his finger. He is a rude man who only listens to creatures of the sea. They are telling him the Strange Creatures threaten him, and he must take his revenge. 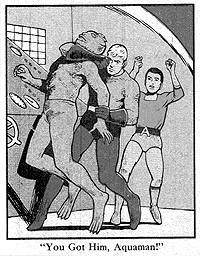 Aquaman breaks the Strange Creature's neck. The squid and seahorses told him to kill it. Water animals hate intruders to their world. They use Aquaman as their cruel enforcer. Aqualad is pleased. He revels in violence.