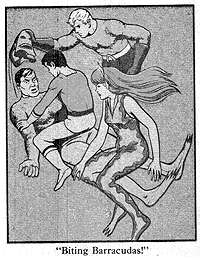 The Creatures tricked Aquaman. They put a person in a costume so he would look like them, and Aquaman murdered him by mistake. Aqualad is trying to be love way with the dead human. It's because of Aquaman's bad parenting that he does such things. There are no barracudas in this picture. This caption is a lie. 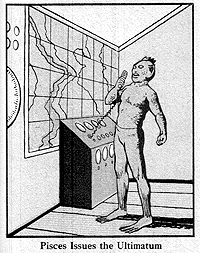 The Strange Creature is issuing the Ultimatum, which is an amazingly powerful weapon. The Ultimatum melts all the water, so it evaporates and the water animals boil and die. Aquaman will have no squid or seahorses to communicate with during his final moments. 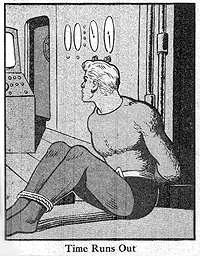 Aquaman knows there is no escape. His feet have been tied, and one of his arms has been chopped into a nub. If he had fish feet like Mermaid, he'd have been harder to bind. The Giant Scissors will not cut him free. Aquaman is being punished for killing the Strange Creature, especially because it turned out to be a person, and for not paying attention to Aqualad, who now has perversions, and for not being careful when taking animals' murder advice.

This book tells us that Strange Creatures see our every move, but we shouldn't get angry about it and kill them, or people who look like them, unless we're sure we have all the facts. Also, it warns us that water animals are bloodthirsty. I think the True Lesson is that even if you think you're just killing a monster, you should be really sure first. Like if you cut the thing with a knife, it will probably bleed a weird color if it's a real monster. The End. 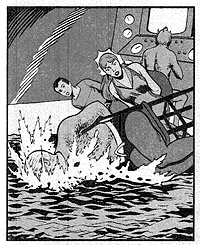