"This American system of ours, call it Americanism, call it capitalism, call it what you will, gives each and every one of us a great opportunity if we only seize it with both hands and make the most of it."

I'm still drunk. Not much sleep sprawled on the floor of Assemblywoman Martha Simpson's office, rolling around on the carpet with a collection of empty Coronas. Martha Simpson, Democrat from Flint. Where are you now? Off to Chicago to rub shoulders with the water barons and the union leaders? Or something more personal? Second honeymoon, maybe.

The Coronas clink together as I sit up and in the gray morning light finally notice all the framed photographs on Martha's bookcases. The girl next to me stirs. Karyn Something. One of the young republicans working out her daddy issues on an old warhorse like me. The petite, fair-haired granddaughter of a Fox News anchor. Not Hannity, the other one.

What can I say? She liked my scars and wanted to talk about PMCs being the ultimate realization of capitalism in the 21st century. Halfway through a case of beer it's hard to say no. I was vulnerable. She took advantage.

Karyn has a "don't tread on me" tattoo - femininely small - on her tanning bed shoulder and something that looks like a spaghetti butterfly hovering above the pale shadow of her thong. Last night she wanted me to choke her, but I wouldn't, so she spit on me and called me names. Commie whore. Liberal faggot. It wasn't bad. I pretended I was James Bond sleeping with that Chechnyan girl in Her Majesty's Final Order.

"What are you doing?" she asks, digging in her purse for something.

"Trying to figure out who Martha Simpson is," I say, getting to my feet to study the framed photographs on the shelves. 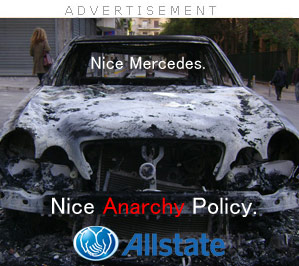 There are a few of Martha, a stout woman in her late fifties, shaking hands with politicians and activist groups. Most of the photos are of other, younger women. Three daughters, graduating college, one of them holding a baby, and younger, with braces, ruffled prom dresses and posing awkwardly with their dates, younger still, skiing, on a beach, splashing in the rain.

Back behind the girls, covered in a layer of dust, there's a picture of a serious looking jarhead wearing Marine Corps dress. A Captain. The picture is old, probably going back to Iraq War, and he ain't in any other pictures.

"You want to know who Martha Simpson is?" Karyn is beside me, wrapped in a Lewis-branded thermal blanket, chewing on some mint gum. She picks up a photo of Simpson posing with a frail Bill Clinton. "Michigan 15. One of the Wolverine Wusses. If that cunt were doing the job the people elected her to do the furloughs would have been layoffs from day one and none of this would have happened. The union thugs never would have built up a head of steam."

"I don't know. I don't get into politics. Last night excluded."

Karyn tosses the picture into the garbage can. "It's a little late for you to be saying that. You guys are part of the false flag operation."

"Does everyone know that?"

"Just the true believers," she says.

She lets the blanket slip and presses against me all soft and friendly. I'll admit, it's a strong argument to sell the kids and vote Republican. All apple pie and war and piercings below the equator.

"Is the door still locked?" I ask, but I don't really wait for an answer.