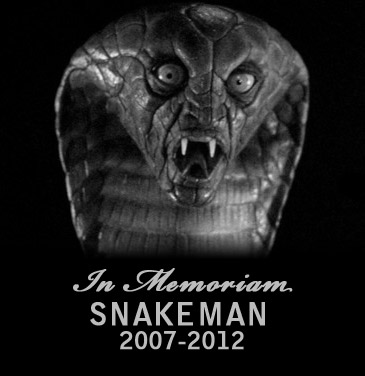 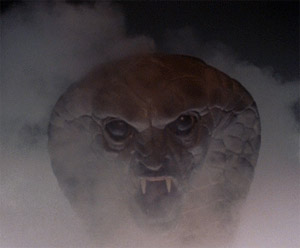 I think what I remember most about Snakeman was his curiousity. He would often emerge from the lurid purple mist of his lair and ask me, "Why did you create me?" or "What is this realm?" Jeez, I didn't know what to tell him.

I could have said, "We manifested you from our collective fears" or "We just needed an IT supervisor," but neither felt like the right answer. We wanted Snakeman. We needed him and we just didn't know it at first.

If I had to pick one phrase to describe Snakeman it was "a great dad." Lori, he loved you, and he loved his kids. Bonnie, Chelsea and Sslatch-Va, Who is the Dark-Bearer, the nest he made out of Ethernet cables and rodent skeletons was covered in photographs and artwork of his family. Whenever he would do that thing where he would go into a trance for three days and then slowly eat his own shed skin he would stare at that picture he took with all five of you.

Snakeman talked endlessly about his family. Lori, he called you his "ape-thing consort" and he would get that smile on his face, you know the one. He loved to brag about his kids. "Ted," he would say, "you will one day kneel before Sslatch-Va, who will bring an unholy epoch of darkness to this world."

He was so proud of Bonnie and her gymnastics and Chelsea and her viola playing. "They are so talented," he would brag. "My females will sire a new generation of snakekin warriors." He loved to say that thing over and over again, "A river of blood will flow from their loins." 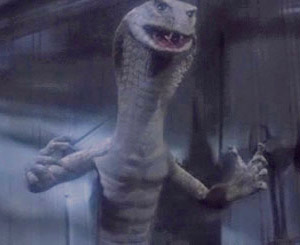 And he was a great coach. He coached Pee-Wee soccer and Pop Warner football, always wearing that purple satin jacket with the snake symbol on the back. True, he could be a tough coach, a lot of talk about "obey me, my shock troops" and threats to dissolve muscles with his venom. But in the end the Peterson Advertising teams won first place both years he coached. And the kids loved him. You can't argue with those results.

I want to leave today, by asking that we all try to access the Snakeman inside ourselves. You know, he didn't like to talk about it, he wasn't a braggart about himself, but Snakeman did an awful lot of charity work. He erected those pyramids on Clark Street. Nobody asked him to build that strange obelisk or the arch of black stone over Huron Avenue. But once he built them, boy, it felt like we'd been missing them this whole time.

I often walk past that arch with the glowing red gems and the intricate snake carvings and I think about how Snakeman has left his mark on this place. That's what I want all of you to do tomorrow. Get up and be your best Snakeman. Don't wait for somebody to ask you to do something, go out and leave your mark on the world.

Goodbye, Snakeman. I know you believed that you could never die, only slumber, so we'll see you again soon. Goodbye.

Zack Parsons is the author of the new sci-fi/horror novel Liminal States, which does not feature Snakeman.