The doors to the mess bang open and the two guys from the Buick bluster into the mess. They're accompanied by another guy, skinny, late sixties, wearing rumpled UPAT blues like he was sleeping in them. Two stars on his collar. The name HAYDEN is stitched on the strip over his breast. Face red enough that he's either been doing too much yelling or drinking, or maybe both. He doesn't say anything, just sits down between Vargas and Pike.

"My name is Major Quincy," says the burly guy from the Buick.

Quincy doesn't look up from the tablet in his hands.

"Juan Herrera was an intelligence asset under Air Force protection. He was providing us with information to direct drone strikes at narco-terrorists in Northern Mexico. We believe he was using us to eliminate rivals, but as long as he was under our watch and in the United States we knew he could not directly benefit. You just delivered him to his friends in the Mexican military."

"I thought they were on your side," says Spinoza.

"The money Washington was feeding the Mexicans ran out," says Quincy. "So some are still on our side, but a lot of them have gone rogue. Working directly with the cartels. General Valdez was one of them."

General Hayden kicks the underside of the table.

"So you fucked us," he fumes. "Washington is going to chew out my asshole."

"Assisting Herrera in his escape is a serious problem for all of us," says Quincy. "Including you. Unless you help us." 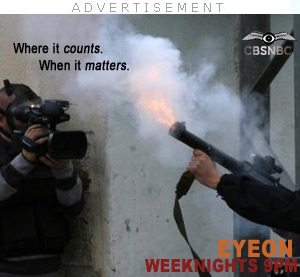 There it is. We fucked up, so now we owe them.

"Ain't short-term project, getting him back," gripes Hayden. "He's probably in the Yucatan by now or one of them cocaine bunkers they got along the border. Plotting the overthrow of the whole of North America. You really fucked us, I can't even--"

Major Quincy calms his commander with a hand on the shoulder.

"We have more immediate problems," says Quincy. "Are you familiar with Brody Sondergaard?"

None of us have heard of the guy. Quincy taps on his tablet and hands it to me. My cuffs clink as I take it from him. The picture open on the screen is a phone pic of a man looking into the camera, squinting against a bright lamp. His eyes are dark, haunted even, and his wrists show the bruises of tight bindings. He looks to be sitting on the floor of a basement. A handwritten sign hung around his neck reads, "LYING SINNER."

"That is Brody Sondergaard," says Quincy.

"Another pain in my ass," mutters Hayden.

"He's one of the most popular reporters for CBSNBC. They call him a news cowboy because he goes in by himself with his recording gear and does live reports. He goes wherever the action is. Six days ago he decided the action was in Corpus Christi. Now the Children have him as a hostage."

I'm beginning to think it was a mistake hiring an old drinking buddy like Pike. I expect another outburst from Hayden. The general folds his arms across his chest, tucking his hands under his armpits, and leans back in his chair.

"They want us to rescue Sondergaard," says Spinoza.

"Not a rescue," says Quincy. "We tried that already. We hired a high-end team from RUSFOR. They disappeared with our down payment. We're not doing that again. This is a prisoner exchange."

"Why not send your biker gang?" I ask.

"Kilo Angels gonna be turning over every rock from Houston to Colombia lookin' for Herrera," spits Hayden. "Spending time and money we ain't got to clean up your mess."

"More to the point," says Quincy, "we do not want our fingerprints on any of this. Not until Sondergaard is safe. Of all the networks, CBSNBC is the most hostile to secession movements across the country and the friendliest to the USA. They've been keeping the kidnapping quiet and we have promised to ensure his safe return."

"You shouldn't make promises you can't keep," I say.

Quincy shakes his head a little and continues, "If we fail to save Sondergaard it will be a PR disaster. The Feds will definitely shut down Freer. Paine'll run wild, drive the Lieutenant Governor crazy, and Texas will be on its own in a year."

"I'm guessing we don't have a choice," says Spinoza.

"Sure you do, little lady," snaps Hayden. "Make up for what you did or rot in a federal prison in Kansas for twenty years."

Pike lets out a long exhalation. Vargas hangs his head so low he almost disappears under the table. Spinoza sighs. I just stare at Hayden, wanting nothing more than to kick his whiny old staff officer ass back out the door he came in through.

Quincy reaches down and taps the tablet in my hands. The photo of Sondergaard is replaced by a picture of an awkwardly obese young man, practically a kid. He is pale, dressed in a huge suit jacket over a straining collared shirt. A wave of butter-blond hair is slicked back on his skull. He's holding a bible to his breast with one hand. In the other he is holding a stem microphone like it's a teacup.

"We have Jeremiah Childs," says Quincy. "The prophet of Corpus Christi."