Center: The center area of town is occupied by a retarded fisherman who is very concerned about the disappearance of his net. The stones in the water he was standing next to formed the shape of a cross, but upon closer inspection, I decided that it was actually an arrow facing north, and the Lord was blessing me with directions on how to retrieve this poor man's net. I went due north from there, but all I did was walk face first into a tree and look like an idiot. Damn you Jesus, damn you and your stone-placing trickery! 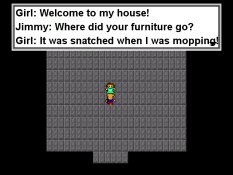 Yes, that is correct, the "1945 gang" stole all the furniture out of her house WITHOUT HER NOTICING.

Southwest: The southwest quadrant of the town is occupied by a little store with the owner standing in the walkway, right on top of the grass that seems to be growing inside his store. If you try something foolish like talking to him or attempting to make a purchase, he helpfully informs you that "I would let you into my store, but weapons and items are very scarce! Try looking for power-ups in the forest!" With a stupid business model like that, no wonder he can't afford to pay a gardener to come in and mow the inside of his store.

Southeast: The house in the southeast is where the game's epic storyline kicks into gear. You walk into a big empty room that contains a single girl, appropriately named "Girl." When you talk to her, you discover that your worst nightmares have all come true - the "1945 Gang" is on the loose! Apparently she was in her house mopping, and the 1945 Gang managed to come in and steal all of her furniture without her noticing. Also, sometimes when you talk to her more than once the game will get stuck in an infinite loop where it keeps switching back and forth between her two screens of dialogue forever. The talented staff behind "Breakthrough Gaming" couldn't possibly have done this by mistake, so I think this was just done to show that talking to the mentally handicapped for too long can have consequences. ETERNAL CONSEQUENCES. 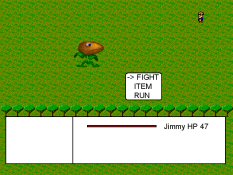 After wandering terrified through the forest I was viciously attacked by what appears to be a beanstalk glued to a sharpened coconut, and I got hit twice before I could attack because I was laughing too hard.

After exploring my wonderful town I set out into the big, scary forest and wandered around slowly, almost as nervous as an altar boy during Holy Communion who has to bend over in front of the priest with his eyes closed and his mouth open. Fortunately after I fought my first battle I learned I had nothing to fear, since combat is the usual lazy "choose to fight, use an item or run" system that Squaresoft is desperately hoping people never get tired of. And if you take some damage during a battle, don't worry, you get automatically healed up to maximum after every encounter. The graphics don't help compensate at all, since everything is made up of horribly animated sprites that would have looked bad on the Commodore. Also your character's feet are completely transparent, and for the sake of my own sanity I'm not even going to ask why.

This brings me back to the great mystery - why do all Christian games suck? As I mentioned before, the elements are all there for a cool game plot, and yet nobody takes advantage of it. Perhaps it's because creating a Christian game requires sincere belief in the bible, and since believing in creationism in this day and age basically requires you to stick your head in the sand and shut down the logical part of your brain, nobody who is capable of programming a good game is willing to waste their time making games that are guaranteed to fail. But together I think we can change all that. If you happen to be a talented game programmer, email me and we'll discuss a fair price for you to use my now-patented "Christian game that does not suck" idea. However, you will be contractually obligated to open up the game with that one joke where Jesus walks into a bar holding two nails and says "Hey man, can you put me up for the night?" Anything less would be a sin.