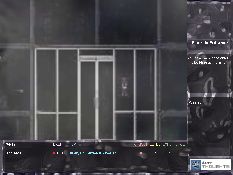 Oh good, I have "no wish" to enter that building! And I was afraid this was just a lazy and uncreative way to keep me from entering a building I'm not supposed to go into until later. My mistake.Okay, I’ve finally caught up to myself, and will soon pass myself on a straightaway and go on to a glorious first place finish in the Mushroom Cup, so I can now describe the game itself. There have been bad things going down in the fine city of Metapolis, perhaps because its citizens are tired of living in a city whose name sounds like a diet pill. After going through a character creation process that involves clicking Reroll 80 million times until you get the stats you want and then clicking OK, you find yourself in a restaurant while the following deep and complex plot unfolds:

Your brother is missing.

All that is known is that he was last seen somewhere in the Old Quarter and that was two weeks ago. The police have been helpful but their search has not been successful. Sometimes, if you want something done right, you have to do it yourself, and so you are looking for him.

The game’s engine is about as sophisticated as a Powerpoint presentation, because instead of being able to actually, you know, run around and do stuff, you simply click on different arrow keys to choose where you want to go and then you are shown moving around with no actual animation at all. The exception is that whenever you go outside, little white flakes constantly come out of nowhere and fly all over the place. It probably isn’t supposed to be snow because there’s no snow on the ground anywhere, so I’m guessing the author was just really eager to show off the particle shower code he copied from an “OpenGL programming made E-Z” book he shoplifted from his local Barnes and Noble. 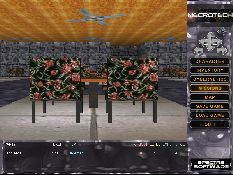 The ceiling fans are just textured onto the ceiling, but that's only because Poser doesn't come with a ceiling fan model for them to steal.

It gets even worse when you enter combat. When you walk around outside, every two steps you will encounter a thug who demands money. You can choose to say “Ok, sure” and give him money, in which case he will instantly disappear, or you can say “No way loser!” and start a fight. The battle engine is a simplistic menu-based system that was probably ported from an Apple IIe game, only it has the added benefit of random white polygons constantly streaming out from your character and flying all over the place. My character had a rating of “excellent” for both accuracy and luck and he specialized in pistols, yet every time I fired (using an “aimed shot” that takes longer but is more accurate) I managed to miss at least two out of every three shots. The enemies aren’t any better, so you don’t need to worry about getting killed unless an enemy decides to punch, which connects almost every time and inflicts more damage than a shot with an automatic pistol. After realizing this, I unequipped my weapon and happily punched away for the rest of the fight, and by constantly punching I easily won the battle and every battle after.

While you’re travelling around to exotic locations like “Billy’s Pawn Shop” and “Max’s Conventional Shop” your eyes will be assaulted by the worst Poser modelling since....well, actually I don’t think I’ve ever seen a game company actually use Poser models in their game before, especially one that also wants you to pay $15 for the privilege of looking at a 404 page. Spectre Software simply took the default human models in Poser and used an advanced mathematical algorithm to give them the dumbest facial expressions known to mankind. Don’t believe me, stupid man? Well, here’s a little collage that demonstrates the author’s fearsome poser skills, sucker!

This collage is also a storyboard for the first part of the game’s story.

1.) Store Keeper: “Help, those jerks took all my money and ran away but fortunately they stopped running about 30 feet away! Go kill them!”
2.) Thug looks at my character, Fagorama, and growls menacingly.
3.) Fagorama pulls out his gun and fires a few shots before deciding it is useless, then punches both Thugs to death.
4.) "THANKS, PAL!"

After this, the store keeper lets you travel to the rest of the city, which is essentially a giant maze where every building and alleyway look exactly alike. Despite Game Thoughts’ steroid-induced ravings about redefining the industry, Necrotech only serves as a pathetic attempt at an Elder Scrolls-style open ended RPG that finally answers the burning question “What would Morrowind be like if it was set in the future and it sucked?” Sorry guys, better luck next time with your industry-redefining. Maybe your next game should spend more time in devolopment.