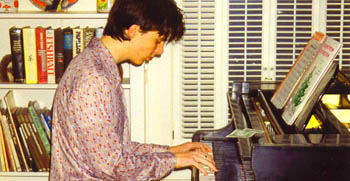 SA: A forums member says he would love to hear about the music you might have heard early in childhood, during "that 'pure' state (without any other context) when you're first deciding what sounds good, bad or strange."

WK: I've thought about this a lot and tried to remember what records were being played in those early days. I didn't have older siblings or older kids around a lot, so I was really only exposed to music through my parents. They had a great, great, great love of music. They were constantly listening to music, playing music, singing around the house. My dad played piano. That was great, but that also meant that for many years, the majority of records that I owned, that I listened to, that I was given, were children's records, like Raffi, like Dan Crow, which is the first album I remember specifically considering my own.

Once I got a little bit older, and I could sort of fathom that I could choose what to listen to and that I could request things, there was this record that my parents had played a lot, but because it wasn't a kid's record they never really told me about it. It was from this series of albums called Hooked on the Classics, and it had two long sides, and each side was a medley of all the most popular motifs from classical tunes, so you'd have everything from Bach to Beethoven to Mozart to Gershwin, but it was all set to this very driving disco beat which just did not let up. It was really rocking and very well arranged and very compelling. It was completely instrumental, so it had that soundtrack quality. I remember just playing for hours while listening to the record. It was this feeling of excitement, a feeling of being high, and it was so particular and so strong and so automatic. There wasn't this faint sense of "oh, it's funny, when I put this record on, I feel a little different, it's cool, it's like a good feeling, I like this song." It was a completely overwhelming state of euphoria.

It still took a couple years for me to realize "wait a minute, music does this. It's not just that record, it's not just when I'm running around the house, I could be sitting still and hear some piece of music and it has this physical feeling, this really particular physical feeling." Over the years, I just found more and more records that did it, but it was all different kinds. Another one that I've listened to over and over again that I specifically went out and bought -- had my mom buy for me -- was the "We Are The World" single. I just liked that sound of all those voices singing together. I wasn't familiar with who most of the people were at that time, except Michael Jackson and maybe Cyndi Lauper, but I could tell that I liked the sound of so many different people all singing together, the same words, the same part, you couldn't really distinguish each voice. And I like the way it got really huge and loud and it moved up and got even bigger and just kept going. That definitely had an impact. And I could really understand what they were singing about, it was clearly about this good vibe and being nice and all that.

SA: Does your dad party, and did you learn anything about partying from him?

WK: My dad taught me a lot. It's just a very important relationship to me that has grown more and more important over the years, as he's developed and as I've developed, both as people and as father and son. I'm very grateful for all his support, and all that he's done for me.

My parents had lots of dinner parties, and I always found them extremely, extremely stressful. I didn't like them at all. But I did like the feeling of when they were downstairs and I was supposed to be going to sleep, and I would just lay in my bed, and the lights were all off, but I could see the light coming from downstairs, from under the door, and I could hear all the voices from downstairs and the clinking of glasses and the laughter, and I really liked that. It was a really specific feeling of childhood, and I don't know what it means or why it felt so good. There was just something very comforting about it.

I don't know that my dad ever really liked parties, and I don't want to speak for him, of course, but that is the impression that I've gotten. It just has to do with a certain type of temperament that is not necessarily suited for certain social settings. Ideally, you want to call upon that place of comfort from deep within yourself so you're just always comfortable, no matter where you are or who surrounds you, but I also think there's nothing wrong with wanting to be alone, and I think I've taken a great deal of that from him. I've found a way for me to be useful and comfortable in social settings by facilitating partying. I think that's what I learned from him, was that there's gotta be a way to participate in this party where I feel good about it and I feel like I'm having fun. For me, that just became providing entertainment. 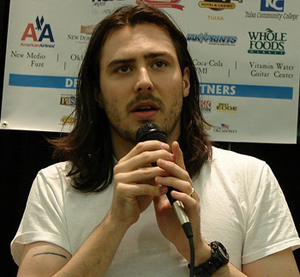 SA: Is there any story behind your tattoos?

WK: There's no meaning behind them except that there's no meaning. When I turned 18, I had a bunch of different tattoos in mind, and a lot of them were going to be skeletons or skulls, but somehow I decided not to do that, and I don't remember exactly what stopped me. I think I realized that the idea of having an image that represented something specific was going to be very, very intense, and I wasn't sure that I wanted to do that. I was just going to do a band around my arm or wrist, just a black stripe the size of a piece of duct tape, but then I thought, maybe I'll just do a line, because it could still look like a bracelet or something if you go all the way around. So I got a sewing machine needle and used some India ink and started making this line.

I was going to go pretty far, but it was taking so long, and there was a considerable amount of pain, and I couldn't even tell if it was working, so I just let it stop after about 45 minutes. I guess it's about an inch and a half long or so. And then I did a few more lines, and over the years, I got some lines done at tattoo shops, where they're very professional and it takes them two seconds. I guess I have 4 or 5 of them, maybe six if you count the really small ones. But yeah, I just really wanted to have a tattoo, but I didn't want it to represent anything specific, so in the end, it ends up representing the idea of it not meaning anything, so that kind of backfired. But that's fine, I'm happy to be caught in between those two states of it meaning something and meaning nothing.

SA: Tell me about the evolution of your vocal delivery, from the gruff shouts on I Get Wet to the tuneful singing of a Close Calls with Brick Walls track like "The Moving Room." Also, are you already planning different approaches for future recordings?

WK: This music, it seems like it just dictates its own sound to me. It's not always a sound that's set in stone, and it's not always a sound that remains set, even after a song is recorded. Sometimes live, something will be dictated by the spirit, and the song will sound different again, whether it's the vocal style or the performance on any of the instruments. You just hear this stuff in your head, and then you play it, so it's not often figuring out what to do, it's figuring out how to do what you hear in your head. The song already exists, with the way the vocals are going to sound and everything, and then it's just "can I pull it off?"

This music that I've been working on has really been focused on making a song that sounds a certain way and feels a certain way, and that feeling is as much how the song goes as the lyrics. The feeling of the whole song is coming from one contained place, and that includes the vocal style, the attitude, the personality, the phrasing, the guitar sound, the drum sound, the other instrument choices, so I'm just trying to make this music that I've already been experiencing. Sure, there are times when something happens and it seems like it came out of nowhere, but if it sounds good and you like it, it's just because it's fitting into what was meant to be.

I would certainly hope that all the time I've spent playing music improves my ability to do it in the future, and that is a very humble hope and desire. I certainly have a long way to go, and I'm excited about that. It's like you're looking for this buried treasure, and you're constantly scouring the globe, not only looking for the treasure but also finding better tools to get to the treasure, and sometimes the search for the treasure is just as good as finding it, but getting those glimpses of the treasure, or hearing when someone else gets the treasure and becoming so inspired and motivated, that's what pushes me to keep going forward. There's just so much more music left to make.

Thanks to W.K. fans Zach, Tedder, Inspector_71, Zorak, Final Fart Buttball, Captain Scraps, Sporadic and Dain22. Watch NMD threads for the next Q & SA opportunity, and if you're not already an SA member, join to participate!