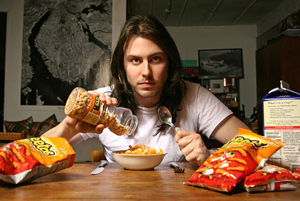 SA: As someone who a lot of people look to for positivity, do you feel any pressure to be prolific during "these tough economic times," as though someone exclaimed "We need Andrew W.K. to cheer people up, now more than ever!" and signaled you with a distress beacon?

WK: I'm certainly aware that times have been harder than at other times for certain people. I think it's important to have solidarity when going through those sorts of phases, and I like to think of it as a phase. We, as a people, as a nation, as the human race, have gotten through all sorts of challenges much bigger than this one, and what else are we going to do, what other kind of attitude are we going to take, except to take it in stride and figure that it's part of a transition to something bigger and better. Even if it isn't, or even if it wasn't, it certainly isn't going to help to give up, or to throw our hands up and say "wow, it was a great run while it lasted, I guess it's really it and done," because it never has been it and done before, so the odds of it being it and done this time are very, very low if we look throughout history.

There's a lot of energy going around, and even anxiety and stress, that's emotional energy. We can harness that energy and put it toward all kinds of outcomes. The universe itself doesn't recognize whether this is a good turn of events or a bad turn of events, and for some people right now, times might be going better than they've ever gone. It's important to remember it's up to us to make of this what we will, like with all situations. I don't know that it really should be looked at as "hard times," because five years from now, ten years from now, maybe even one year from now, this could all lead to some great turn of events for some of us, and hopefully all of us, in one way or another. And we'll look back and say "I'm so glad that things have moved as they have," because it was all part of a bigger unfolding story. I think all of our lives are unfolding in the right direction. Sometimes, it may not seem like it, but that's when we have to have - not necessarily blind faith, but a belief in our own potential and our own resilience and our own strength. I think it's great to be in a state of challenge, because it calls upon us to bring out our best, and that's how progress is made, by unreasonable situations, by outlandish conditions that cause us to go beyond what is reasonable or commonplace and really find what we're capable of.

Have I felt a sense of responsibility to be a positive force? No. I don't find it to be a responsibility, I consider it a privilege. We all have the privilege to impact those around us -- and the world in general -- in a positive way. It's great to be able to have the chance to cheer somebody up. It's great to have someone give you that opportunity, or to have someone look at you in a way that allows them to let you cheer them up, and whether you do that with a friend or a family member, your boyfriend or girlfriend, your co-workers or strangers on the street, you're doing yourself a service to put out good vibes. When you're talking to someone, you're expending real, physical energy. It takes effort to do that, and it has a result. It's like the entertainment we create for each other, the movie of what it is to be alive.

SA: Is there any music that you can't party to?

WK: No, there is no music that you cannot party to. And that's the great thing about music, partying and being alive in general. It's an open playing field, for each person to pick and choose from and enjoy like this giant smorgasbord. There's no limit on how much you can have of anything, but just like a smorgasbord, you might fill up on too much taco meat, and then you don't have as much room for the Soft Serve sundae. You take what feels good to you, you move on, you go back to old favorites, you discover new favorites, you realize that the entire buffet can be a favorite in itself. Being alive and having the ability to enjoy the world around you can be your favorite thing about being alive, and that sure makes it fun. So any music that gives you any kind of feeling that's enjoyable, just thank the heavens that it exists and that you've found it. 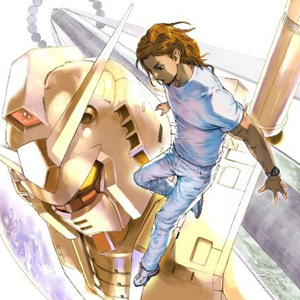 SA: How much do you sleep? It seems like you must be well-rested to have so much energy, but conversely like you might be too wired to fall asleep easily.

WK: It just totally depends. I'm someone who has slept a lot, and I'm someone who has gone without sleep. It's hard to answer questions that have to do with routines, because there hasn't been a lot of routine to my life, for better or worse. That's something that's been consistent, that sort of inconsistency. I just go with how I feel. If I feel like staying up, I'll stay up. If I feel tired, I'll sleep. I'm very grateful that I have the freedom to operate like that, and certainly there have been times when I've had something that I had planned on doing and then suddenly felt tired, or when it was really important for me to get rest but I didn't feel like sleeping. I just try to make my life allow for me to follow what I feel like doing, because I figure the more I do that, the more I'll be doing what I'm meant to do.

It seems like the most successful you can be in life is by doing what you were meant to do, to really be yourself, and part of being yourself is doing what you feel like you want to do at that moment and learning how to really listen to your instincts. There were times when I didn't sleep for many days, and I felt weird about it, like I was somehow being bad or that this was destructive behavior, but I got a lot of work done, and I really enjoyed the time. It was very inspiring and intense and tiring in some ways, but it was also completely exhilarating. I couldn't have slept if I had wanted to. It wasn't time to sleep right then. I think we can all just listen to our bodies and souls and spirits, and the more we listen, the more we'll flourish.