3. Take a dose of the Australian Ugly Things vinyl compilations (writes Barman). Maybe both editions of the Murder Punk bootleg series or the Where Birdmen Flew LP. All should be apparent then.

Some great suggestions right there. I have, and I did, and all is. Fuck yeah! Ugly Things: Black Diamonds, Jackson Kings, Vacant Lot (with the timeless plea of stoned students everywhere "Don't Let Me Sleep Too Long"), Creatures and of course Missing Links and the Easybeats again. I have neither the space nor the inclination to go into depth here, but you are just as able to search YouTube as I am, and to look through collector blogs for illegal downloads, not that I'd recommend that of course, and I'm merely trying to give you a couple of pointers. Ugly Things is the fucking bee's bananas, the hornet's beeswax, the solar-plexed Monty. You cannot go wrong with it. Check it out, if you're a fan of the Monks, the Rats, Los Saicos or indeed the mother-lovin' Sonics.

The Murder Punk series is fine too, but it ain't what I was looking to discuss when I started this topic - it's early Australian punk, late-'70s style. If I classify punk as garage it blows the field wide open, but there again ... why shouldn't it? it seems that the connection is far clearer in Australia than other countries. There's an entire strain of UK punk that didn't have anything to do with '60s garage rock at all, whereas the Australian punks (Radio Birdman, Saints, et al) seemed to be a direct continuation.

The Murder Punk comp does contain The Scientists' "Pissed On Another Planet," though, and for that alone we should be very grateful. 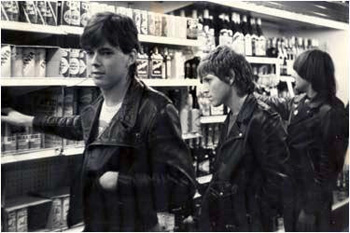 The Scientists used common household products for their experiments.

Electricsound throws the first major spanner my way, showing up my knowledge of the genre for what it is: pitiful. "Three recommended comps if you don't have them," he writes casually. "It's A Kave-In! (Kustom65), Peculiar Hole In The Sky (Big Beat), Hot Generation (Big Beat)." I've looked, and I don't have them. I looked again online, and they look great. Damn.

5. The Black Diamonds outta Lithgow (writes Huwzey) claimed they had enough material to play for two days straight but only released a couple of singles, crazy good though.

The next comment, from Wipey, pretty much nails it, even though he doesn't mention Tales From The Australian Underground - all that '80s Birthday Party/Moodists/Laughing Clowns/Lighthouse Keepers stuff, perhaps my favourite compilation of music from anywhere EVER. Well, all right, not ever. I just wanted to see if you were still awake. It's still a fucking great primer though. 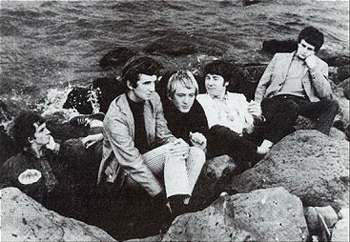 In Australian Lucky Charms, hearts are purple and diamonds are black.

6. Some more names for you (courtesy of coolestjerk):
Chinese Burns
The Twilights
The Leather Souls
The Morloch
Machine Gun Kelly's Rejects
Derek's Accent
The Moods

"Some bands in the US Midwest take offence at the term "garage rock," as they equate it with pudding bowl haircuts and Farfisas," writes Barman.

"Pitchfork says dilapidated/abandoned farmhouse is where it's at in 2011," writes Bugsy.