8. For a great resource on Australian mid-'60s garage bands (writes FrankieTeardrop) , get your hands on Ian Marks and Iain McIntyre's book Wild About You, published in 2004 by Melbourne radio station 3CR. I'm pretty sure you can still get a copy from them. Weather Records released a CD of local bands covering songs by the '60s artists covered in the book. Highly recommended! Includes profiles of The Atlantics, The Missing Links, The Purple Hearts, The Creatures, The Throb, Toni McCann, The Elois, The Black Diamonds, Running Jumping Standing Still, The Moods, Tol Puddle Martyrs + more.

OK. This seems like a little bit too much information (and that's not even including all the comments about great grungy new Brisbane bands like Hits, or where the punk/garage divide falls, or why are Radio Birdman classified as garage when they have elements of prog, or how the Australian Birds - a band from Perth - simply appropriated the name of the UK Birds, featuring Ronnie Wood, in the hope of securing a recording contract) ... it must be time to turn to my friends on Facebook.

Oh god. The first handful of suggestions straight out the gate include Spiderbait, Silverchair and AC/DC. This is not what we're talking about AT ALL. I'd like to include The Birthday Party among the list of classic Australian garage rock simply because I like to include The Birthday Party whenever I'm talking about music full stop - I worked them into both my Ramones and Nirvana books - but to do so would be to blow the gates wide open once more. Although that still shouldn't stop you from investigating Tales From The Australian Underground (parts one AND two) as it really is the shit. Serious. 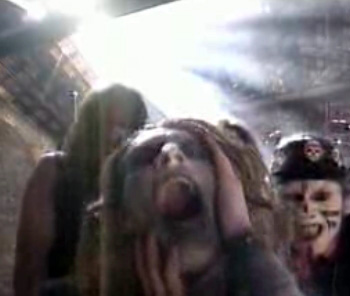 Splatterheads: Not as metal as this screencap suggests, but still good.

A more reliable contact suggests "Bored!, Powder Monkeys, Philisteins, Hoss, God, The Sunset Strip, Splatterheads, Red Planet Rockets ... invest in all the Do The Pop comps (DTP and redux 1 out now, redux 2 and 3 out later this year), both of Tim Pittman's Tales from the Aus Underground comps (all 7" cuts, amazing), check out Citadel back cat, Au-Go-Go Records, Waterfront, Dogmeat ... Greasy Pop from Adelaide too... blah blah blah..."

Man, I really have opened a can of squiggly gelatinous sprawling worms, haven't I?

My PhD supervisor thirds Do The Pop as "a good a round-up of the '80s Detroit/Stooges/MC5-influenced bands as you'll find. I'd second the Missing Links record (who were much earlier). They had a song that played completely in reverse as a B-side on one of their singles, which was pretty radical at the time."