Chris Cornell's Scream doesn't yet have a release date. There's no "release date" for Armageddon, either, but it's only natural to be terrified if you see a Horseman wearing a "Pestilence" sash stampeding down the street. Cornell's new material qualifies as a harbinger for the apocalypse of his career. 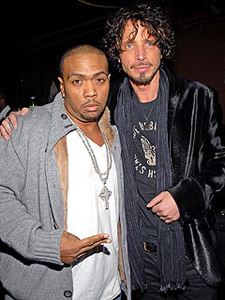 Timbaland poses with his new "Magoo."While better respected and less dead than most grunge singers, Cornell has been in decline for some time, starting with 1995's "Spoonman," which is not only the stupidest song Soundgarden ever recorded but also would rank as the worst tune ever to feature silverware prominently, if it weren't for the Crash Test Dummies' minstrel-folk frolickry "Afternoons and Coffeespoons" and that "hey diddle diddle" bullshit about jumping cows. "Spoonman" won a Grammy for Best Metal Performance, demonstrating the Recording Academy's subversive practice of ridiculing bands for their weakest efforts by giving them an award in an inapplicable category.

Soon after Soundgarden ended, Cornell released the solo album Euphoria Morning, which the public disregarded and the Record Academy mockingly recognized with another Grammy nomination. Euphoria Morning contained a Jeff Buckley tribute named "Wave Goodbye," perhaps an overapt title for a song about someone who was swept away at sea after drowning.

By the time Cornell joined the remains of Rage Against The Machine in 2001 to form Audioslave, the years of feral shrieks had taken their toll. He sounded as if his throat had been raped by a rake. Listeners could hear the raw tendrils of his larynx bursting violently during that group's single "Cochise," like a bloody shootout in his voice box. Also, Cornell's words became dumbfoundingly simple. Apparently, a now-severed stem from his ravaged gullet once connected directly with the brain quadrant responsible for Soundgarden's lyrical content.

In 2006, Audioslave released Revelations, on which Cornell and company embarrassingly flirt with funk, folk, boogie blues and other diseased genres that smart bands wouldn't fuck with borrowed gear. It proved to be the death knell for this unlamented "supergroup," as the backing players sought asylum with a Rage Against The Machine reunion, and Cornell seized the opportunity to release another largely ignored solo record.

With his previous two albums having sunk into the abyss like precious folksingers, Cornell was becoming desperate, so it's understandable that he took Timbaland's phone call and listened to his pitch about making him "the first rock star in the club." It even makes sense that he made the trip to the studio, just in case this absurd cross-genre gamble might have freakishly succeeded. But as soon as the poisonous fruits of the Scream sessions leaked their acidic juices into his soon-to-be-bleeding ears, he should have retreated, making these songs the messy, abortive byproduct of a wretched coupling that was heedlessly consummated. 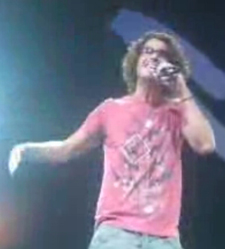 Dance songs require fresh choreography, as demonstrated by this "swim move."In order to minimize the traumatic effects of experiencing the subsequent Cornell/Timbaland samples, I'll start the dissection process with "Watch Out," a malignant musical tumor that makes the other songs, any one of which might normally be the worst thing you've heard all year, seem benign by comparison.

"Watch Out" features the sort of perky electro-pop backdrop that Pink used for filler tracks three records ago. In a wheezing growl that makes him sound like a tired, gray-furred bear, Cornell relentlessly describes a woman who drives recklessly. "She keeps on going when the light turns red"! "She's goin' 90 in a residential zoooone"! By the time Cornell rhymes "passin' fools like they goin' in reverse" with "I think her brakes don't work," "Watch Out" starts feeling like an unwitting parody of itself. It resembles one of those lesser Weird Al spoofs, where he spends several verses hammering away at a one-joke premise that can barely sustain a single line.

During the ghastly chorus, Cornell's multi-tracked rasp chants "pick it up, pick it up, watch out, now pick it up," a phrase that makes little sense in the song's laboriously established careless-motorist context. Perhaps "pick it up" refers to the removal of deceased animals, children and other detritus left in this hellracer's pitiless wake.