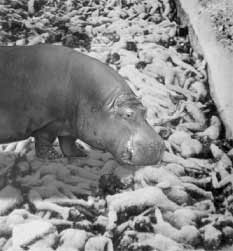 Hippos are a holocaust waiting to happen.Alert, alert! You're being attacked! All of that careful planning just didn't prevent some go-getter of a predator from coming after you. Maybe our directions were wrong (impossible) or maybe you're just a stupid fuckup who can't do anything right and will never amount to a goddamn thing (highly likely). The cause isn't really that important when you're caught in the clutches of a deep sea eagle, but before you can decide upon a course of action you need to correctly identify your attacker. Try to take a few deep breaths or, if your lungs are being crushed by the constricting coils of a tentacle, just hold your breath and try not to pass out. Okay, now try to use your toe or a prehensile tail to reach into your PDA, connect you to the internet, and view the following list of distinguishing features of some of the world's most dangerous predators.

Polar Bears - Polar bears are always under house arrest. At least one leg should have a tracking cuff around the ankle.

Juice Tigers - Juice Tigers make a whirring sound similar to a blender and smell like a mixture of fresh fruits and vegetables.

Pelicans - You can be 100% certain that you are being attacked by a Pelican if you hear a high-frequency tone and then a split second later your head explodes.

Nurse Sharks - Nurse Sharks are into the leather and latex bondage scenes and usually make a squeaking or creaking sound as they walk.

Staggeringly Gargantuan Deep Sea Squid - These hideous monsters of the deep are accompanied at all times by the underwater theme from Super Mario Brothers.

Eagles - Whenever they use their teleportation or shadow meld ability there is a strange suction sound and the smell of burnt hair.

Tigers - The inside of a tiger's mouth feels chalky.

Orangutan - If you sense wacky happenings or kooky goings-on in your immediate vicinity that's a good sign that an orangutan attack is already underway.

Cobras - Cobras are allergic to just about everything and are usually heard sneezing, sniffling, or blowing their nose.

Giant Crab Monsters - They look just like Vic Tayback from the TV show "Alice" and they smell like a mixture of gasoline and sweat. Unlike Vic Tayback they cannot be killed by a stake through the heart.

There are some more but I'm running late for a haircut appointment so you'll just have to make do by asking them what they are. If they don't respond just assume they're an eagle or something. Now it's time to move on to step 3, which is selecting a course of action.
Previous More Guides Next