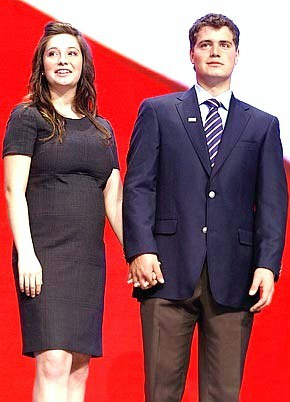 AP DUDE: Hello mr. johnston im an old faggot dude with a tape recorder I want to ask you a shitload of questions nobody gives a fuck about ever in history. You ready?

AP DUDE: How much wood you swinging?

LEVI JOHNSTON: I should slap your face you gay old dude, but I'll go ahead and answer you since you are from the AP Newspaper. 18 inches sticky pine, tears guts up like broken glass in cheerios. I get in a bitch and she starts screaming like I put an alien monster up inside her. "AHH THAT MONSTER HURTS AHHH!" Like that.

LEVI JOHNSTON: Serious as a terror threat. Serious as that ben stein dude talkin about science from the bible.

AP DUDE: How good are you at sports?

LEVI JOHNSTON: Let me put it this way, you know michael jordan? I'm like the white drunk michael jordan of alaska. Only with amateur hockey.

AP DUDE: You ever do it with bristol and another chick?

LEVI JOHNSTON: One time I hooked it up with her and her sister willow. I told them to start kissing each other and then I jizzed and they were still making out and it got real weird so we never talk about it. But I think if I got bristol drunk or fucked up enough on codone she would be down, so bitches feel free to email me or just call the campaign they know how to get me.

AP DUDE: What are you planning to do after the campaign is over?

LEVI JOHNSTON: After mrs. palin becoems veep and makes me a duke I think Im just gonna settle down in my castle with willow and have some non retarded babies and maybe win scratch and win lotto. I mean bristol.

AP DUDE: thank you, do you have anything else to add?

LEVI JOHNSTON: BABABOOEY BABABOOEY (I yelled it about 25 times until he left)

Yo, actually I left a shitload of tight answers out of there, but I just realized I wrote like four pages and that is so gay I think if I write anymore pages on this I am gonna flip around and be like that gay dude having the baby which is like the most and least gay things possible at the same time.