HEY I ALSO DO PRANK CALLS TO FAMOUS POLITICIANS

My biggest prank of all, and you may remember this one, was back when I was still engaged to Bristol in 2008. Mrs. Palin had been picked to be the VP lady or whatever and she was yelling at people about terrorists and whatever the fuck and people were saying she didn't know shit. So I figured the way to get a laugh out of it all was to call in and pretend to be a foreign dignitary and to convince her we were negotiating or whatever. They asked me not to run the full transcript back then but I figure what the fuck, who gives a shit now? 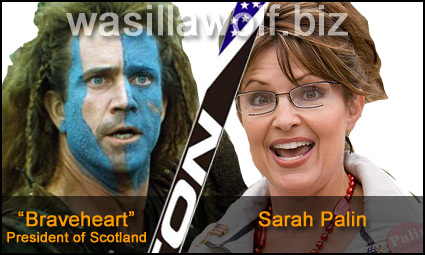 <Mrs. Palin> Oh, yes, hello, it is so good to hear from an ally of America, and also how are you today?

<Braveheart> Aye, well met! I am hale and hearty. I am fighting for freedom.

<Mrs. Palin> Freedom has to spread its wings and grow for democracy to prosper in the world.

<Braveheart> Aye, how is the election going for you? I was very excited to hear there might be a woman president.

<Mrs. Palin> Well not yet, just a Vice President, but thank you so much, and god willing maybe president too and...

<Braveheart> Aye, we hope for peace, but I fear Longshanks will deny it to my people.

<Mrs. Palin> Oh no. Well sometimes the best defense is a good offense.

<Braveheart> Aye, it swells my tits to hear your speak so. Hamish said the same just the other day.

<Mrs. Palin> Here in America we also struggle for freedom and freedom is under attack by regulations and political correctness and the lamestream media and so for business to prosper and also to grow the atmosphere of free-thinking people against tyrrany.

<Braveheart> Aye, the lamestream media. They have taken my land and taken my wife, but there is one thing they can never take.

Anyway, that's just the tip of the telephone. I have thousands of hours of these. Me and Bodie and Tucker used to just sit up all night and get high on crushed up fertilizer tablets and eye medicine that we put on contact lenses and we'd call every place we could think of, usually until the cops broke into our line and warned us to stop.

I hope you enjoyed them or not or whatever.