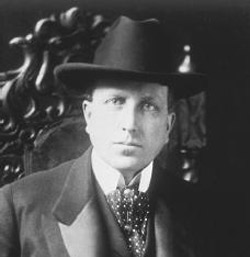 William Randolph Hearst was the heir to a mining fortune and a print mogul of the late 19th and early 20th centuries. While many have argued that bad journalism has contributed to wars, Hearst is the only media mogul to have ever promised and then delivered a war for the United States of America.

By the last decade of the 19th century, William Randolph Hearst had become a powerful player in the American news business. By 1895 he owned the San Francisco Examiner and the New York Morning Journal. Hearst's attempts to promote his New York paper led to an acrimonious fight for circulation with Joseph Pulitzer's paper the New York World. To catch up to his adversary's circulation levels, Hearst reduced his paper's price to a penny per copy and both papers began running sensationalist stories in an effort to top the other. These wild stories were often exaggerated or completely untrue and eventually earned the nickname "yellow journalism." 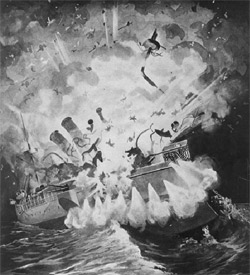 During the height of yellow journalism in New York City, Hearst's paper began to advocate liberating Cuba from Spain and he hyped real and imagined atrocities being committed against the Cubans by the vile Spaniards. Hearst had a war correspondent and illustrator named Frederic Remington sitting in Cuba waiting for a war to start. After a while Remington telegraphed Hearst complaining that no war was happening and that he was returning to the United States. Hearst replied, "Please remain. You furnish the pictures and I'll furnish the war."

What followed was a series of articles depicting the Spanish as nothing short of monsters. The series culminated in a screaming headline about a fortuitous (for Hearst) magazine accident aboard the USS Maine. The US naval vessel was moored in Havana when her powder exploded and sunk the ship. Spanish terrorists were blamed and with Hearst screaming from the pages of his papers war became inevitable.

A bewildered Spain was brutalized fiercely by American justice and democracy, surrendering 200 years worth of colonial expansion to the United States in a matter of months. An unexpected consequence of the conflict was a horrific three year war to pacify the former Spanish colony of the Philippines that killed as many as a million civilians.

Hearst would go on to expand his newspaper empire to more than 30 American cities and live nearly 100 years in a fucking castle surrounded by all of the riches of Europe and all of the bitches of USA.

You reap what you sow, motherfucker! 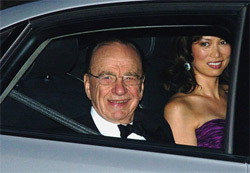 Did I say media mogul? I think I did!

Kicking off our top three with a little shock and awesome is Australian-American news kingpin Rupert Murdoch. He started and owns a controlling interest in News Corporation, America's third largest media conglomeration behind Time-Warner and Disney. He has spent decades building his media empire, which includes dozens of newspapers and television stations.

Most Americans know Murdoch, along with his seneschal Roger Ailes, as one of the masterminds behind Fox News Channel. The conservative bias of Fox News Channel is inarguable for those with triple digit IQs, but the question of whether or not that bias constitutes a threat to mankind is often overblown. There's nothing particularly wrong with a television news network having a bias. Objectivity is preferable, but it's hard where human beings are involved.

Unfortunately, Fox News Channel was not started by human beings. It was started by squinty geriatrics with terrible accents and Viagra boners for war and American flags. What Murdoch and Ailes did with FNC was far worse than start a biased news network: they took a huge messy diarrhea across the concept of the fourth estate.

When not colluding directly with Republicans in government or trotting out simpering hosts to massage the prostate of fun-lovers like Dick Cheney with approval ratings approaching single digits, Fox News engaged in a sort of 24/7 televised war against journalism. Any journalist who dared to question the government was accused of treason. Questioning the government is, like, I don't know, just a journalist's MOTHERFUCKING JOB DESCRIPTION. 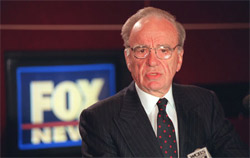 People were excited about being told not to know anything about anything. It was fun. Yo, lovin' Fox News bros, just having some fun not know fucking shit about dick. Pass that No Limit compilation my way!

Fox's competition reacted predictably by cowering in fear and trying as hard as possible to become Fox News. They abandoned their posts at the ramparts of journalism like MPs that just heard they were handing out free pussy at the PX. Thanks to Rupert Murdoch and Fox News the United States was left to get actual reporting from Knight Ridder, a blue collar wire service that got ignored because it didn't believe there were WMDs, and blogs.

Congratulations, Rupert Murdoch, it took you less than a decade to destroy almost all vestiges of journalistic integrity in the United States. Luckily, I've got blogs. Hooray for fucking blogs. Let's see what dumbassliberal.blogspot.com has to say about whatever headlines they just thought up while watching an anime.

William Randolph Hearst could only dream of that sort of power.