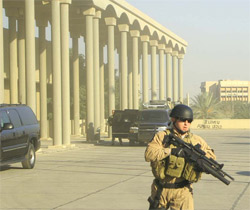 Erik Prince is a mogul that, with the addition of a goatee, could be the Mirror Universe version of Joe Francis. He's a couple years older than Francis, but in every way but the two most important (the money and the power) he's pretty much the exact opposite.

Prince is the reclusive and camera-shy founder of Blackwater Worldwide, the largest private security contractor in the United States. Prince is a former Navy SEAL and a fundamentalist Christian from a very wealthy family. He founded Blackwater on the ideology of the extreme right wing of the United States. Prince is so extreme in his beliefs that he has criticized the Bush administration for its overly tolerant stance on homosexuality, which is like criticizing an angry hornet for not stinging enough.

There are a lot of moguls connected to right wing politics and the military industrial complex, but few send as many cold shivers up spines as Erik Prince. Blackwater isn't making jet engines or cruise missiles, they're building Prince the best-equipped private army in the world and drawing on some of the best and brightest of the US military to provide his manpower. His employees abroad have already been accused of atrocities, including shooting unarmed civilians. 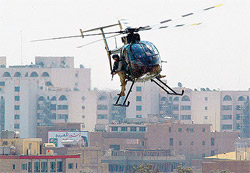 One of the most troubling incidents occurred in 2006 when a vehicle driven by Blackwater employees struck a US Army Humvee in a traffic accident. The Blackwater employees disarmed the US soldiers at gunpoint and made them lie down in the street while the vehicles were pulled apart.

Call me alarmist, but that is some crazy scifi movie creepo bullshit. Erik Prince has an evil name right out of a Left Behind novel. He gave his company an evil name too, associates with evil people, and has a private army of elite troops trained at his secret evil training camp. This year Blackwater was even given permission to own and operate evil armed aircraft, a step up from the evil transport helicopters they have been using to transport evil evilness around Iraq.

I'm not saying Erik Prince is the most awful mogul on the list, I'm not even suggesting he's the scariest, but Erik Prince is definitely the one to watch. 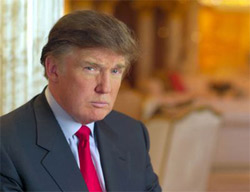 You know a mogul has become overexposed when just the sight of their face or the sound of their voice can make you feel like you want to vomit blood. When it comes to Donald Trump, I want to puke hate shits onto his ugly face. He is omnipresent in the media in the United States. He feeds on press, good or bad, and he seizes upon any opportunity to get his face on the news or spout his inane opinions on the radio.

Just including him on the list here means he is winning, because I'm talking about him and I'm growing the Donald Trump brand. I can't help it. He's a shitty businessman who builds shitty dumb buildings and invests in really stupid projects. He loves failing to repay loans, getting sued, suing people, and losing at life by fucking up marriage after marriage.

He's compensated for his career of failure by becoming the worst thing possible: a dull gadfly. He backs beauty pageants so boring it's difficult to believe they are still televised, but he generates attention for them by creating fake scandals. 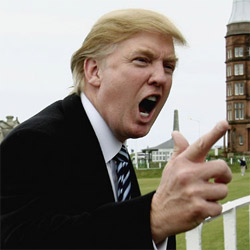 Trump's he's-joking-but-oh-no-he's-really-serious TV show The Apprentice is a concept that is so lame it defies belief, until the next year when he somehow discovers a new way to make it even worse. I'm referring to concepts like foisting his layabout offspring on the American viewing public or adding a new twist that was probably shit out stillborn by an underpaid network think tank of kids in NYU sweatshirts and funny hats.

The zenith of the Trump annoyance came earlier this year when he picked a fight with Rosie O'Donnell. I would be fairly hard-pressed to conceive of two human beings I would less want to see exchange barbs in public. The ever-helpful media devoured all things Trump and O'Donnell for weeks on end, practically salivating over witticisms like "she's fat as hell" and "his hair is fake!" Trump played it coy, using the controversy to gain access to every conceivable venue and then feigning offense that he was being forced to discuss "that fat pig."

As it turns out, the joke was on Trump. The latest season of his show tanked in the ratings and I still want to choke him out with a dog catcher's lasso. Ha ha!