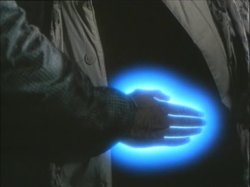 Now that Sonia's pregnant she's positively glowing!!! LOLOL ^_^Secundus, who is on the prowl for a human female to carry his space-seed, is disgusted at what a shitty player the boyfriend is, so he quickly emerges from the surrounding woods and drags him out through the car window to exhibit his disapproval. Sonia gets out of the car and starts running away, but Secundus, working under the notion that as long as the girl is out in a secluded area someone ought to sexually assault her, chases her down and space-rapes her. Space-rape, for the uninitiated, involves placing a glowing blue hand on the girl's belly for two seconds accompanied by a series of oscillating hums. This is distinctly different from space-lovemaking, which involves a glowing green hand, or space-abortions, which involve X-rays.

Afterwards Sonia runs away, and as Secundus basks in the afterglow, Abraxas finally catches up and space-arrests him, which involves pointing a gun at him so he can be teleported away to another planet. Now that Abraxas has dealt with a murderous criminal lunatic, he can move on to his next assignment: HQ calls and orders him to hunt down and kill the newly-impregnated girl within two minutes, which he immediately runs off to do. Of course, once he finds her, he can't bring himself to kill an innocent girl, so instead he stands there pointing a gun at her while an increasingly urgent voice counts down to T minus zero, at which point I expected the world to blow up or something, but instead a baby suddenly appears in Sonia's arms.

Abraxas then vanishes and the girl slowly makes her way back to civilization holding the baby. At one point she is crossing a bridge over a river when she stops and approaches the edge, looking back and forth between the bundle in her arms and the river below. More to the point, she briefly considers drowning her newborn baby. To reiterate, it's only ten minutes into the movie, and already the hero has seriously pondered killing a pregnant woman, and the heroine has come within inches of throwing her child off a bridge. Damn Hollywood liberals.

Sonia finally gets home and her father is so shocked and upset that her daughter has had a baby that he throws her out of the house. Now that I think about it, maybe this movie actually doesn't take place on Earth, since the fact that the daughter was clearly not pregnant earlier that afternoon doesn't seem to faze her father for a second. Perhaps all children on this Elseworld Earth are conceived via space-lovemaking and after a 120 second gestation period teleport out of the womb and into their mothers' arms. That might also explain the burning snow.

The movie then fast forwards five years, where the space-baby has grown into a space-child. There's a montage of the kid, whose name is Tommy, running around and playing with his mom. Concerned that this was too sentimental and gushy, the director made sure to intercut the scene of mother and child hugging and laughing with shots of random objects exploding. I swear this is 100% accurate. Characters in this movie could wipe their noses and their wadded up Kleenex would go off like a bucket of napalm.

Meanwhile, Abraxas's bosses continue to hurl expository dialogue at one another like bricks, revealing that Secundus has escaped from space-prison and is returning to Earth to hunt down the child. Turns out the kid is the prophesied "Culmator" or "Comater" or "Clomid" or something and may be capable of "unconsciously computing the anti-life equation" which "would allow entrance to the anti-universe." Secundus wants to enter the anti-life universe, maybe because he is too stupid to realize what "anti-life" actually means. Seriously, why do villains always want to do shit that ends up destroying the world / galaxy / universe? I guess if you crave absolute power then the best way to achieve it is to destroy everything that you might possibly not have power over, but it seems like it would get kind of boring lording over the three stray atoms that managed to survive the cataclysm. 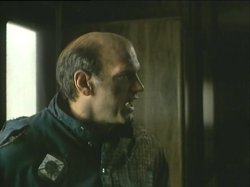 Guardians of the universe have no defense against male pattern baldness.To make sure Secundus doesn't succeed, Abraxas's idiot bosses quickly send him packing back to Earth in a wormhole. Both he and Secundus arrive at Earth at the same time but neither happen to have any weapons because "the streams were crossed," which is another way of saying "we don't want to have to pay for any more laser-gun special effects."

The two spacemen come out of the wormhole and fall into a lake, and each one is treated to a thirty-second closeup where the water bubbles around them as they jump out screaming in super slow motion like some sort of bastardized scene from "Fast Times at Ridgemont High". While they are busy doing this, the scene cuts to Sonia, who is in a meeting with the principal of the local elementary school. The principal, who is played by Jim Belushi in what must have been a slim year for him, explains that because Tommy doesn't speak, he isn't welcome, since the school is a "normal school for normal children." Then there's the following exchange:

Principal: He's getting special attention all right, Mrs. Murray. His presence is causing a problem with the students. Frankly, Tommy scares the piss out of them. And they act out. They push him. They call him names. They tease him. Constantly.
Sonia: Why don't you just tell them to stop teasing him, to stop pushing him, to stop calling him all kinds of names? Have you ever thought of just telling them to stop it?
Principal: (Long pause) No. No I haven't. Um, I'm - I'll try that. I'll just speak to the kids. I'll just - I'll just tell them directly. That's a good suggestion. I'm going to try that.

Considering that we never see the principal again, and Tommy appears to stay enrolled in the school, this scene appears to exist for the sole purpose of showing that public school administrators are morons, a refreshing bit of candor for an otherwise retarded film.

The scene then cuts back to the woods, which I guess is right next to the lake that Abraxas and Secundus landed in. The two then have possibly the most boring chase scene I have ever seen in my entire life, as Abraxas chases Secundus through the woods on foot for five minutes, with endless, silent footage of the two of them weaving around saplings or ducking under branches. After running a marathon in this fashion, Secundus finally stumbles upon a campsite and steals a car from a family. After Abraxas catches up he manages to hitch a ride in the family's RV, which has set out to chase after Secundus to get their car back. During the ride Abraxas says he knows where Secundus is headed, which leads to this classic bit of dialogue:

Father: So what makes you think you can locate my 4x4?
Abraxas: My box has VD, trust me.
Mother: Your what!?
Abraxas: VD. Vibrational Detection.

Abraxas's "box" is his "Answer Box", a little device strapped to his forearm which occasionally spouts information or advice, like a sassy robot sidekick. In fact, Abraxas orders the box not to speak unless spoken to, but because it's so sassy, it does so anyway, causing Abraxas to scrunch his nose and threaten the box again. Secundus has an answer box as well, but that box knows its place, because Secundus is not a little bitch.