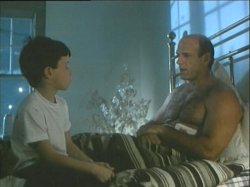 Come closer, little boy, and I'll tell you a tale.From here on out the vast majority of the rest of the movie is a long, straightforward chase scene, where Secundus attempts to get to the little boy and Abraxas tries to keep the kid away from him. After Secundus recharges his answer box and randomly breaks some Coke bottles to show what a badass he is, he heads down to City Hall to find Tommy's address. Abraxas races over to stop him, and just as Secundus is about to kill another random kid who just happens to live in the same house as Tommy, Abraxas dives through the window in slow motion and the two have a slow, awful fistfight. Perhaps I should have mentioned that earlier in the movie Secundus said that he could beat Abraxas in hand to hand combat, and this is pretty much true, since every time they meet, our valiant hero Abraxas gets the crap kicked out of him. In this go-around, Secundus manages to break a floor lamp in half, and then impales Abraxas on the jagged stump. You have to feel a little bad for Jesse Ventura when even in his very own movie he still is a pushover.

Sonia and Tommy come back to their house to find Abraxas still impaled on the lamp, and after pulling it out of him, Sonia executes a quickie "how can I trust you oh okay I trust you" routine and the three drive off to stay with a fat hippie that sells organic foods to Sonia's grocery store. After the hippie sets them up for the night and Sonia puts Tommy to bed, Tommy gets up and wanders into another bedroom, where Abraxas is sitting up in bed, naked from the waist up, and possibly from the waist down too. As Thomas peers in the door, Abraxas looks at him lovingly and says in a slow deliberate tone (this is 100% accurate):

Abraxas: Hello. I suppose you're not tired. Do you want to sit up here with me? I'll tell you a story. It's about two men who were partners.

Uh... huh. I'll skip the rest of the story, except to say that it also involves a lot of completely random explosions. Meanwhile, Secundus wanders into a strip club after a guy on the street says something about "exotic dancers". I think there's also some sort of guideline that all shitty low budget action films are required to have a scene inside a strip club, because this is literally the extent of it:

The only possible motive I can divine is that the filmmakers wanted to inject some overt heterosexuality into the film after Abraxas's bizarre speech to a little boy, but I'm probably way off base. Also, the scene is accompanied by an internal monologue given by Secundus, which leads me to wonder who exactly is the star of the movie here. If Abraxas is so tough, why does he continually get his ass kicked, plus not getting exclusive monologue rights? In fact, Secundus gives several internal monologues throughout the movie, showing that the director is daring enough to break the tradition of only allowing the hero to have them. This is almost assuredly because the director has no idea of what he is doing, but hey, art is art.

After a whole lot more cat and mouse, Secundus finally gets a hold of the kid, and takes him to an abandoned warehouse so he can taunt the boy before finally extracting the anti-life marrow out of his bones or whatever the hell it is he is planning to do. The movie had slacked off in the random explosions department for a while, but here it starts kicking into overdrive, as the kid suddenly gains full-on "Firestarter" pyrokinetic powers. As the kid backs away from Secundus, piles of rags and wood start bursting into flame and blowing up. Secundus throws a chair at the kid, and it explodes in a fireball. Tommy runs into a washing machine, which promptly explodes. This sequence goes on for five or six minutes, as Secundus keeps backing the kid into new and exciting corners, full of flammable or inflammable objects which invariably explode. Apparently this explains all the previous random explosions, as they were foreshadowing for the kid's magnificent powers of blowing shit up. At one point, they make sure to drive this home by compositing video of an explosion directly over the kid's face, just to make sure you know that it's him that's causing it, and not an invisible pyromaniac ghost who happened to wander into town that day.

Abraxas and Sonia finally rush into the warehouse, and as the entire place is burning and even more explosions are going off all around them, the two spacemen engage in another slow, awful fight scene where they both punch directly at the camera lens to capture that sort of "in your face" intensity that would only be equalled in the Sega CD classic "Prize Fighter." Eventually the kid gets bored and causes an explosion to knock both of them out a window, although Abraxas manages to grab hold of the windowsill and pull himself back in after hanging on the ledge thinking to himself for a few minutes. The three try to flee the burning warehouse, but Secundus reappears, just in time for Abraxas to finally gain the upper hand and vaporize him using his Answer Box, which proves useful for something other than robotic sass for once in its miserable life.

When the police finally arrive they don't seem to much care about the big weird guy who has been seen all over town, often in conjunction with shootouts, chases and explosions, and as Abraxas receives his new assignment from HQ, he asks if it would be possible to stay on Earth, with his newfound family who have grown to love him despite all odds in the midst of adversity. HQ decides that he can stay, and the kid is so happy, he speaks his first words ever, saying he is glad Abraxas can stay with them. What a heartwarming, joyful ending it is. When child services has to come to take Tommy away, they are all going to be devastated.