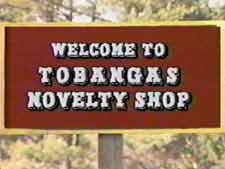 Once he's done butchering the utterly unnecessary story of the gay hayseeds (or as I call them, gayseeds), Renny takes a moment to gaze sorrowfully at a picture of Amos (read: look vaguely in its direction). The incredibly poor photo is the only glimpse we ever see of Amos, including during the flashback sequence from the beginning of the movie. Fueled by his desire for revenge, or possibly pie, Renny decides to go learn himself some voodoo. So, he gets on a plane and heads for stock footage of someplace tropical... uh, that is to say, the West Indies. We are treated to a series of shots of an island paradise. Oddly enough, the film quality is significantly poorer for those clips, and by "oddly enough" I mean "because they are obviously copied off another tape." Renny's destination is Tobanga's Novelty Shop (the novelty is that there's nothing for sale! At all!), where he is approached by a fat, bald man. I don't know if it's his robe, his ceremonially shaven head, his mystical presence, or that fact that he is the only other freaking person in Tobanga's Novelty Shop, but something tells me that this individual is Tobanga himself. Sadly, Renny's powers of observation are not quite as strong as his powers of illiteracy, and he wastes a good five minutes of screen time dancing around the question of who this strange man is. When he does find out that it's Tobanga, he's shocked. You know, I wasn't going to say anything before, but the script for this movie is goddamn awful. 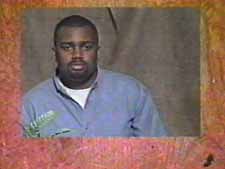 For my money, Tobanga is the best actor in this trash heap, in the sense that he can both pronounce his lines and actually memorized most of them. That being said, he still has his moments where he forgets what his next line is and pauses for minutes at a time. Why that wasn't edited out, I'll never know or particularly care. Tobanga leads Renny to a darkened room. The Polonias went out of their way to give the room an island feel by putting a potted plant in the background. They are true artists. Renny offers everything he has to Tobanga in exchange for the secrets of voodoo. Everything he has in this case is two dollars. That struck me as a little cheap for asking someone to whore out the secrets of their ancient religion, but Tobanga goes along with it. He proceeds to ramble on about voodoo and revenge and evil for God knows how long, mentioning the name Blaqui Blaque (like Marky Mark, but without even the least funky of bunches) approximately forty thousand times. Tobanga then shakes his maraca until Renny falls asleep, then holds out a snake. The snake must be one of those rare tropical invisibility snakes, as its bite causes Renny to disappear in the worst attempt at special effects I've ever seen. In his invisible state, Renny has visions of the four gang members laughing and flashing green, stock footage of a snake eating a rat, and a fat white guy underwater. Yaybo. 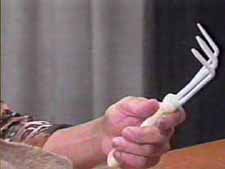 Sure, it's good for voodoo, but it can also till your soil!

Renny returns to tangibility, which I think means that Blaqui Blaque accepted him into the bosom of voodoo or something like that. I'm not honestly certain. It's hard to tell one word from the next when they say Blaqui Blaque between every syllable. If they had used that name one more time in this single scene, I would have dropkicked my VCR. Seriously, if that name doesn't grate on your nerves, chances are you aren't pronouncing it quite right. Anyway, Tobanga begins teaching Renny the secrets of voodoo, which apparently consist of picking things up with one hand, moving them to the other hand, then putting them down again. Ooh, mystical. All the while, a lame synthesized attempt at Caribbean music toots on in the background. The music in Polonia Brothers films is always horrendous, and the tunes are usually recycled between movies, but this one stuck with me. It's not only a horrible piece of music, but it is also vastly inappropriate for the scene. Renny's learning the dark arts in order to exact his revenge on the people responsible for his brother's death, and the music makes it sound like he's about to challenge Tobanga to a limbo contest.

The training stretches on and on until finally it's time to do something that has some bearing on the plot again. Tobanga hefts a sack onto the table. We never get a clear shot of what it says on the sack. I know the first word is "Italian" and I'm pretty sure the next one is "sausage," but that's just an educated guess. In any case, Tobanga shows Renny the four tools of voodoo revenge, each of which can only be used once. It's a good thing Renny only wants to kill four people. If the Red Claws were a larger gang, he'd be screwed. The first tool is a voodoo doll, nothing new there. The next is a set of "poison claws," so named because "shitty plastic trowel from Walmart" doesn't quite have that voodoo ring. Next is a bottle containing a serum of astral projection. The bottle is only half full at this point, but that will miraculously change as the story progresses. Finally, Tobanga gives Renny a scroll (read: torn piece of a shopping bag that has been rolled up) that contains a "spell to make the dead walk." Useful stuff, all and all. Tobango advises Renny that he must "present his enemies........... (huge fucking pause while Tobanga struggles to remember the rest of the line)........ before Blaqui Blaque in the form of a picture." And with that, Tobanga vanishes, accompanied by the sound of Link dying from Legend of Zelda. 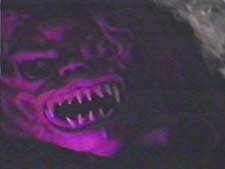 Blaqui Blaque reminds me of the man. The man with the power. The power of... well, you know.

Renny returns to his office and grabs his trusty camera. As if this wasn't enough reminder of what he's about to do, we get a quick flashback to Tobanga's final advice even though we just heard him say the same damn thing thirty seconds ago. Taking that advice, which, I will reiterate, we just heard, to heart, Renny goes out to take pictures of each of the four gang members. Luckily, he knows exactly where each of them will be at all times, so he has no trouble tracking down these four individuals in the whole of New York City. He manages to capture each of them doing what they do best - leaning against stuff. First Ajax, then Mitch, and Calico. Calico, for the record, is supposed to be the gang whore, but she is hampered in this endeavor by the fact that she is obviously a man in a terrible wig. Finally, Renny finds Petey, who would be leaning against a house, but some guy's in his leaning space, so he stabs him and runs away. Despite that violent act, let me emphasize that this is the single least threatening gang in the world. I'd be far more intimidated by a pack of six year olds on ten-speeds or a particularly irritable flock of birds. The entire gang is comprised of an out of shape, bald white guy who runs like a crustacean, two fifty year old white guys in various states of obesity and nearsightedness, and a blubbery man with five o'clock shadow in a yellow wig made out of pipe cleaners. These guys aren't badass enough to dance in a Michael Jackson video.

Renny returns to his office, lays out the photos, and describes in laughable detail how he's going to use voodoo to kill each one of them. Sort of sucks the suspense out of the rest of the movie, doesn't it? He sets out his voodoo tools. This time, the serum of astral projection bottle is almost empty. In order to seal the deal, Renny picks up a plastic machete and stabs downwards. We cut to a shot of a snake opening its mouth in a pissed-off fashion. Presumably, Renny killed the snake, but that sort of thing would be tough for the Polonias to shoot, what with animal cruelty laws and their costly coke habit. Once the "snake" is dead, we see Blaqui Blaque himself, represented as a guy in a stupefyingly bad mask with dry ice behind him. In a reverb-intensive voice that sounds like a horrible Mexican stereotype after guzzling a bottle of cough syrup, Blaqui Blaque tells Renny that he will help him get revenge. Funny, I thought that was already a done deal, what with all the garbage we had to sit through back at Tobanga's place. Well, I hate this movie.