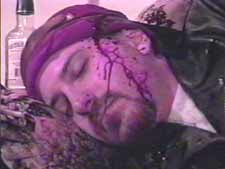 Ironically, this is the best bodily fluid Ajax has ever had on his face while he was asleep.

Petey comes back from the smokes store just as Renny's astral form returns to his body. Renny grabs the poison claws... uh, poison trowel, and rakes it over his picture of Petey. As stupid as this looks, it does rip Petey to shreds, which raises the question, why did the trowel have to be poisoned? I mean, if you chop off a guy's head, does it really make a difference if you put a little poison on the axe? Hmm? Got you there, Polonias! Renny passes out from the effort of moving a plastic trowel over a glossy photograph for twenty seconds in one sitting. He is soon woken up by a completely random and utterly pointless phone call that consists of nothing but screaming and laughing. Let's face it - at this point, John and Mark are just putting in whatever they can find in order to get closer to that coveted ninety minute goal. Meanwhile, Ajax wakes up when he tastes Petey's blood, which splattered on his face. Seeing his dead compadres, he makes a break for it. They didn't even bother filming entirely new running footage for this. They just used his last running scene, plus a few more shots. Ajax finally reaches his destination, his pimpin', riced-out blue Corolla. 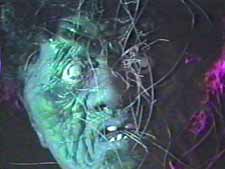 If that's what we look like when we die, then I'm going to live forever... which fits into my plan perfectly...

Renny breaks out his last weapon, the spell to make the dead walk. He brings Amos' corpse to life with instructions to rip our Ajax's heart and bring it back to the office. The Polonias couldn't afford to hire two black guys, so they put a white guy in a mask that out-shitties ever other shitty mask in the movie, complete with ridiculous afro. Poor Amos has had it rough. Not only is he reanimated as a mindless zombie, but evidently he was buried in a dweeby sweater jacket and sneakers. Ajax drives long into the night, but as we learned when he was Marty Beck, this actor cannot be trusted behind the wheel of a car. All Renny has to do is clap and Ajax crashes into a tree. He makes it out of the wreck in one piece, but limping. As we all know, there's nothing worse then pulling yourself out of a car accident, only to be pursued by a zombie. Ajax seeks shelter in a nearby garage (which I think was also featured in "Feeders 2"), but no mere garage door can hold back the awesome wrath of the undead! With a dark snarl, Amos, uh, makes the garage door go up again. I assume he pressed the button. Amos successfully rips out Ajax's heart, but he keels over and dies again before he gets the chance to bring it back to Renny. Jesus, even as a zombie he does a halfassed job.

Renny has his revenge, but remarkably, something goes awry. Renny finds himself teleported via lameass special effects to Hell itself. I have to say that honestly, if that's Hell, I'm not that worried about spending eternity there. All they do is show you poor attempts at disturbing imagery, such as a baby, a cat, and a chain link fence. They're not even a particularly evil baby, cat, or fence. Blaqui Blaque is there, playing with smoke again. Now, though, he sounds less like a Mexican stereotype and more like just a dweeb. For example:

Tobanga and the flannel demon appear to torment Renny. Between Renny, Tobanga, and the two demons, there are enough fat people and crappy masks for at least two more Polonia Brothers movies. The flannel demon gives Renny's soul to Tobanga to do with as he sees fit. As they walk off into the darkness, Tobanga tries feebly to give some sort of closing narration. It sounds like he's reading from a script and losing his place frequently. It's something about Hades and eternal damnation, I think. I don't know. By this point, I was basically just worried about stopping the flow of blood running from my eyes.

There's not much more one can say about "Bad Magic." As far as I could tell, it doesn't have a single redeeming feature. Most Polonia Brothers films are terrible despite, or perhaps due to the amount of effort that the massively untalented cast and crew put in. This time, it didn't even seem like they were trying. The actors barely know their lines and barely move at all. It was more interesting to count the pockmarks on Mitch's face than to listen to his dialogue. Paul Alan's script should have been burned the moment it was written. It will take years of therapy to relax the knot of hatred that has formed at the base of my neck from watching this movie twice. But don't take it from me. Even the Polonias hate this movie.

"I think Bad Magic is the worst movie we made. It was done for a producer in New Orleans who bailed out on us after 1 day of shooting. He left us with no money and our actors (and I use that term loosely) were their so we proceeded, making more script changes than should legally be allowed. My wife, again, filled in for a girl who was supposed to play a prostitute. She really sought divorce attorneys after that!" - Mark Polonia (from correspondence with Rich "Lowtax" Kyanka)

Ha ha ha! There you have it! Way to use the right form of "there," ass. Goddamn, I hated this movie. Friggin' Polonias.