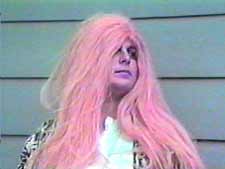 Calico actually looks sort of like Lowtax if you look at him/her/it from the right angle.

Ajax walks down the street, then stops and looks up at a nearby window. There, he sees a sight that would turn a normal man to stone - Calico preparing to whore herself out to none other than John Polonia himself! As always, John's complete inability to act or follow his own direction is utterly baffling and his retarded otter-like face is vomit-inducing. I hate John Polonia on a very personal level and feel that he owes me monetary compensation for the hours of my life that he's wasted. He's only actually onscreen for a few seconds in "Bad Magic," but his taint lingers like the stench of decay emanating from the rotten food between his teeth. "That's it, baby. Make another fifty bucks for Ajax," Ajax muses. I don't know which is worse, that the Polonias' concept of a high-priced hooker (Calico is supposed to be hot) is fifty dollars, or that anyone would actually pay fifty bucks to bump uglies with Shamu the shemale. But as I watched Calico bounce and buck on top of John like a two hundred pound halibut, something terrifying occurred to me. That's not a man in a wig at all! It's Donna from "Feeders" and "Feeders 2!" Dear God, they had to put a wig on her just to make her look like a man in drag. It's so much ugliness at once. My eyes! My beautiful eyes! Once again, for clarification: this = this and me = bent over the toilet bowl. Just so we're clear. 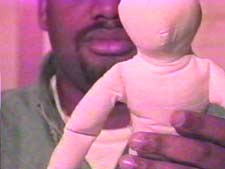 Alright, Renny. Show us on the doll where Tobanga touched you.

Proving that there is a benevolent force in the universe, Renny ends the sexual encounter between Gangly McMoustachelice and Donna von Landmonster by sticking a pin in the voodoo doll. At last, the similarities between the voodoo doll and Calico are clear - the doll is overstuffed and pasty, just like Donna/Calico's overstrained flesh. It works! Donnico grabs her shoulder and tries her darndest to act like she's trying to act like she's trying to act like she's in pain. John is miffed that he doesn't get any more bouncy-bouncy (amazing, considering the force of all that... uh... woman crushing down on his pelvis must have been like being run over by the world's ugliest dumptruck), but Donnico sends him on his way. Renny jabs needles in the doll's torso, limbs, and head, but each time Donnico just grabs her shoulder and grunts. Frankly, it's tough to tell if she's feeling the effects of the voodoo or if she's just having trouble pumping a triple cheeseburger through her ventricles. Ajax runs inside to see what could have possibly motivated Donnico to get rid of her latest trick, but arrives just in time to see her head explode, splattering his face with strawberry syrup. I'm not trying to say the Polonia's used strawberry syrup for blood, I honestly believe that Donna has syrup running through her veins.

Ajax does what he does best: runs like he has the world's worst case of hemorrhoids. Back at the office, Renny has a dream about a guy in a mask and hood that serves no purpose whatsoever, much like my mentioning it in the first place. We transition to the next morning and find Ajax still running. Finally, he makes it to the Red Claws HQ - a small house in the suburbs. I'm sure they're just living there until their crackhouse gets remodeled. Ajax, Mitch, and Petey have a severely retarded discussion about Calico's death. Ajax insists that Calico was killed by some otherworldly force, so Mitch and Petey jump to the conclusion that it was Amos' ghost coming for revenge, even though it was the cops that killed him, not them. They are the saddest excuse for a gang I've ever seen. Mitch looks like he's been putting cigarettes out on his face for the last forty years and Petey has enough fat just from the neck up to build a lifesize adult male walrus. Ajax, being the take-charge leader that he is, goes to sleep on the floral print couch. Petey and Mitch are left alone. Their conversation is one of the dumbest things captured on film, resulting in a fifty year old man in a backwards baseball cap saying "I gotta take a dump" and Mitch and Petey calling each other "cheeselickers." The world of New York street gangs is a harsh and gritty place. 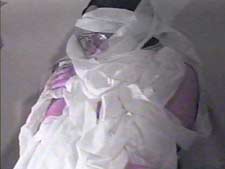 Much to the disgust of every man, woman, child, and small animal that has been in a three mile radius of this movie, the camera follows Mitch into the bathroom (Mitch, for reference, was Sal the "Don't shit a kitten" guy in "The House That Screamed"). The Red Claws must be really into current events, as there is newspaper all over the bathroom. It's all the more remarkable considering Petey's admission that he can't read. Speaking of Petey, he decides that it's a good time to go out "to get some smokes." Picture every chess geek and Star Trek nerd from your high school rolled in a ball of dough saying "I'm going out to get some smokes." Then you might understand why that is almost unbearably sad. Meanwhile, Ajax wakes up and goes to the gang refrigerator, which has three items inside: butter, cream cheese, and prescription pediatric medicine. Ajax must know that Petey would sob like a baby if he ever found his butter missing, so he decides to take the medicine instead. He downs the entire bottle, ensuring that he'll be far too doped up to be of any help when the rest of the gang gets killed. Ah, conveniently placed bottles of children's medicine - where would modern cinema be without them?

We cut out to shots of a busy street in New York, followed by a shot of Petey waddling down a deserted sidewalk. Filming on location is not exactly the Polonia's specialty. To be fair, neither are lighting, sound, cinematography, or directing in general. We don't get to see Petey buy his "smokes" and the next time we see him, he's back at the house safe and sound, so the sequence of shots following him really only serve to prove that he can, in fact, support his own weight long enough to walk for short periods of time. That's when Renny gets voodoo-happy back in his office. Voodoo, by the way, operates on the Clapper. Renny claps twice before activating any of his magic spells/garden tools. This time, he breaks out the serum of astral projection, which is now full. He lifts it to his lips, but when he lowers it, it is clearly still full. Well, whatever. The Zelda sound chimes in, and suddenly Renny's flying through space! Rather, he's flailing like an impaled squirrel in front of a ludicrously cheesy space graphic. He appears inside the bathroom, much to Mitch's quasi-surpriselike emotion. Renny unleashes his unholy fury by covering Mitch in toilet paper. You'd think a grown man could break out of a wad of toilet paper with ease, and you'd be right. What, do you want me to lie? Of course he should have been able to get out, this movie just blows. As if the toilet paper cocoon isn't enough to avenge his brother, Renny telekinetically hurls a bunch of knives at the oddly defenseless Mitch.