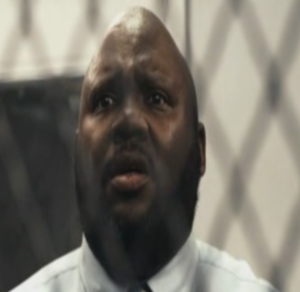 Don't be sad, Glenn! The other black character in the movie doesn't even get a name! Which wouldn't be that big a deal, if it weren't set in FUCKING DETROIT.I could complain even more about the script or the acting or the fact the cast and crew didn't partake in a mass guilt-driven suicide -but I won't. Because of course Butterfly Effect 3 isn't trying to be a good movie. It is trying to be a cheaply done, rapidly produced bad movie, in the hopes that enough people will drunkenly stumble into a 7-11 and accidentally grab it instead of Saw 98 for the producers to make a profit. One thing I noticed is that the film makes a lot of hamfisted attempts to court the lowest common denominator with a blatant blanket- appeal approach, trying to grab a bunch of demographics. Let's celebrate us some diversity!

And there you have it. At the peak of the stuttering monologue that acts as the movie's dramatic finale, a character giggles, "Wow, this is so Scooby Doo, isn't it?" Comparing itself to a boring cartoon that uses two-frame animation with plot twists an eight-year-old could figure out is the smartest thing it ever does.

But why am I pointing this out to you? It's the christhumping Butterfly Effect 3, for fuck's sake.