Now, seeing as how this Markus character (a) is the primary motivation for another character in the movie, and (b) just got a dart in his neck that injected him with a "Smart Chip," you might think that the scene would stay with the boy for a little while to document the brain-boosting powers of the chips that give the movie its title. You would be wrong. Later scenes will show that Markus becomes a math genius overnight but begins to suffer nosebleeds before his disappearance, but hell, it's not like those details are going to have any impact on the plot! No, seriously, they aren't. 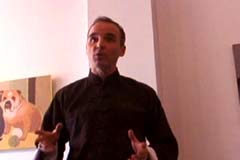 Mad science, art appreciation, blowgun mastery - Steve is a regular renaissance man.Instead, the action sticks with our man Steve, who leaves his day job of stalking, harming, and altering the brain chemistry of innocent children and returns to his evening routine of angering black people. It turns out that Steve is not only a scientist working on what could be one of the most important inventions in human history (if he could get the damn things to work), but he also owns and operates an art gallery. Tonight (whenever this night actually takes place), he introduces the work of photographer Barry Edwards, who happens to be a big black guy. Now, Steve goes out of his way to be nice to Barry, giving him a show in his gallery (which consists of semi-artistic photographs of naked women, which Harris uses to great effect by constantly zooming in on their nipples whenever it seems appropriate), and even inviting Barry's friend to perform a ridiculously lengthy spoken word piece, because black people like that sort of thing, right? Unfortunately, all of Steve's hard work still isn't enough to keep Barry from exploding at him in the middle of the gallery in full view of his potential customers? Why, you ask? Because Steve borrowed money from him to fund his chips, of course. That's right, Steve is so desperate for resources that he's actually borrowing capital from a freelance photographer who has yet to have a successful show. I'm sorry, but if Bio-Soft is a legitimate company and the chips really do what Steve says they do, could they really not find a bank willing to give them a loan? They need to swindle artists out of their Burger King money? Something's a little wrong, here. 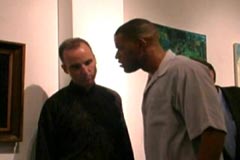 This is how every interaction Steve has with a black person ends. Sooner or later, he's going to have to admit that the problem is him.But I saved the best part for last. Just when it looks like Barry is going to beat the crap out of him just to take the five bucks in his wallet, Steve thinks fast. He tells Barry that if he's strapped for cash, he can earn $1800 by signing up for the 72-hour research study that's being advertised around town. Yep, you read that right, Steve actually tells Barry to earn some cash by participating in a study where he will most likely be paid with his own money. That's so beautiful, I just might cry in slow motion.


Janet Rivers reports the disappearance of her son to the police (which, based on cues in the dialogue, means this scene takes place the day after her first scene from the start of the movie). The guy in charge, Detective James, basically tells her that they'll look for Markus, but she should know that he most likely ran off and joined a gang or took up residence inside a crack den because she's such a shitty mother. Given his less-than-reassuring treatment of Janet, it should be no surprise when it turns out that Detective James is not only on Steve's payroll, but is in fact a prominent decision-maker on the Bio-Soft staff. In fact, basically everybody in this movie falls into one of three categories: (1) Working for Bio-Soft, (2), Involved in the 72-Hour Study, or (3), Unnecessary Plot Hook. It is indeed a sad world to live in. 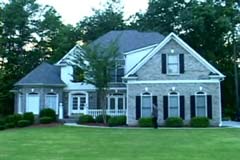 Goddammit, Steve.Now, I could go on and on about the many useless scenes that take place between this point and the start of the infamous 72-hour study. I could tell you about the lengthy scene between Steve and his wife that reveals that while Steve is begging for money from anyone black enough to listen, he is living in a goddamn palace. Or about how his wife finds a chip in his jacket pocket and swipes it. Or about how someone breaks into Steve's house during the night and steals a mysterious disc. I could tell you about Steve performing another field trial of a chip using his trusty blow gun, and how this time he is testing (I swear) an "Insanity Chip," a device so thoroughly pointless as to defy description. I could tell you about how Barry registers for the study, but the woman in charge of registration is a complete bitch to him for no reason, only to then turn around and be inexplicably nice to the far more irritating John. The list goes on and on. But instead, I'm going to skip ahead to the point in the movie when the story mercifully splits into (only) two plotlines. 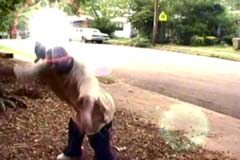 Look out! Bad graphics attack!In the first, Steve and his band of Bio-Soft cohorts (including Detective James, a competent businesswoman named Sam, and an immense, perpetually pissed-off black gal named Medina) go hunting for street dealers selling cheap knockoff versions of their chips. Yes, as preposterous as it seems, we're actually supposed to believe that the amazing technology that Bio-Soft is pioneering - a technology that has yet to be released on any market or publicized in any way - has already been duplicated and turned into the bread and butter of local gangs. Even more preposterously, we are supposed to believe that the Bio-Soft team would hunt these dealers down using an array of inexplicably futuristic weaponry, all of which just happens to look like poorly disguised children's toys, such as a plastic lightsaber with electrical tape wrapped around it. Fully breaking all scientific scales of measuring preposterousness is the fact that we are supposed to swallow all that, and then politely not notice when all of those weapons shoot lens flares. I'm serious about this. They are hunting the sci-fi tech equivalent of drug dealers using guns that shoot bad Photoshop effects across the screen, often in the complete opposite direction of where the user was pointing his or her weapon. See, this is why I say Michael K. Harris is a liar. His every action, no matter how well-intentioned, is overflowing with bullshit. I would give him credit for realizing he didn't have the budget to make normal guns look convincing - something many low-budget directors fail to take into account - but the Olson Twin-thin story given for these pathetic weapons and the crippling assclownery with which the weapon effects were edited far outweigh any positives.

Somehow, in the midst of capturing dealers and torturing them for information (a process that Steve ruins by needlessly injecting one captive dealer with a "Power Chip," giving him enough superhuman strength to easily escape his bonds), the Bio-Soft folks find the time to sit down and have a meeting about their ad campaign for when their product goes public. The ad features a woman talking about how these miracle chips enabled her to pass the bar in all fifty states. The woman then goes on to list the types of chips available, none of which are chips seen in this movie. In fact, the chips mentioned in the ad are all oddly specific. For instance, even though Bio-Soft has seemingly developed an all-around intelligence-enhancing chip, the ad promises "Literature Chips," "Algebra Chips," "Physics Chips," and so on. There are also chips for certain professions, such as doctor, lawyer, and interior decorator. That wasn't me trying to be funny. There is actually a fucking interior decorator chip. 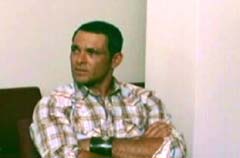 Now who's this fellow? (Hint: no one useful.)The second plotline is the one we've been waiting for since this whole thing began: the 72-hour study. As far as the woman running the study knows, none of the participants know each other. The truth is far more complex, although not in any way that actually affects the plot. Still, let's get acquainted with our five specimens.

Clara, the blonde girl we met earlier, who joined this study for the quick and easy cash, as well as to get away from her loser boyfriend.

John is the loser boyfriend, who joined this study to keep tabs on his girlfriend. He is highly suspicious of any method of earning money through legal means.

Carter is a former trucker whose life came crashing down around him when his wife died suddenly. He is probably the best fleshed-out character in the movie, which is a little sad considering he just appeared out of nowhere& or did he?

Janet Rivers is the final surprise participant. She entered the study at the last minute, after some bizarrely-acquired information led her to believe that her missing son might be in the very building where the study is being conducted. Which brings us back to&

Carter, who isn't so new after all. Yep, Carter is actually the complete stranger whom Janet told about her missing son at the beginning of the movie. This is a complete coincidence and has no effect on anything, other than to prove that the people at Bio-Soft really didn't do much in the way of background checks while selecting participants who have supposedly never met. Let's see, they picked two people in a relationship, two people who met under random circumstances, and a guy who has a major financial stake in the success of the products being tested in the study. That's fantastic.