After an incredibly awkward conversation in which the five test subjects introduce themselves, involving a long tangent from Barry, John, and Carter about the qualities of Southern food versus the qualities of Southern women, they are separated and injected with their individual chips. Now, here is where the whole thing gets a little wacky. Before, during, and after each of these five people registered for the study, they were told repeatedly that they would be sequestered inside the testing facility for seventy-two hours, and that they would be monitored by a staff of scientists and doctors. In actuality, they are going to be sequestered inside the facility for only thirty hours, and the woman who did the registration seems to be the only person on staff. This just adds further proof to the theory that everything Michael K. Harris says or does is a lie. More on this in a moment. First, it is mildly worth mentioning which person is implanted with which chip.

Janet gets the "Power Chip."

Carter gets the "Mood Chip."

Clara gets the "Love Chip."

Barry also gets the "Intelligence Chip." 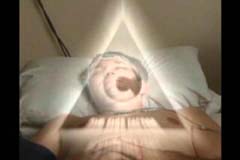 Shitty Superimposed Graphics, I choose you!The immediate effect of the chips seem to be that the subjects experience potent hallucinations, which conveniently happen to take the form of the movie's title screen image. Beyond that, each person experiences different effects. John suddenly gains an understanding of all those subjects he slept through in school. Janet finds her strength augmented to a level beyond her control, causing her slightest touch to be potentially dangerous. Carter finds himself in a good mood. Clara falls in love with just about everything and becomes incurably horny. I don't know, but I'm fairly certain Carter and Clara were actually injected with ecstasy. I'm not saying that injecting people with ecstasy is not a worthwhile experiment, I'm just saying that someone already invented that. The immediate effects of the intelligence chip on Barry are never documented on screen. In fact, Barry doesn't do anything particularly intelligent for the rest of the movie. 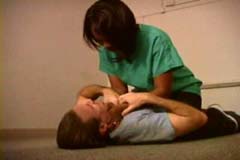 It's worth noting that while nobody really could stop Janet from killing John, no one really tries, either.When the nurse (doctor? scientist? receptionist?) decides it's time to leave the movie forever - a wise decision any way you look at it - the newly enhanced subjects take the opportunity to play. Stuck in a perpetual state of loving horniness for the next thirty hours, Clara beckons John to follow her to a secluded room. John readily agrees. See, he is smarter! Meanwhile, Carter watches them discreetly, cheerfully wanting to share in the good mood produced by their copulation. However, Janet misunderstands Clara's cries of passion for cries of distress and attacks John with her superhuman strength, accidentally killing him.


Meanwhile, the movie finally catches up with itself. Detective James, Medina, Steve, and the other Bio-Soft folks sit down for a friendly game of poker. When James goes on a winning streak, Medina gets pissed and shoots him with one of her futuristic superguns, causing him to convulse until his head explodes. That's right, the opening scene of the movie was actually the Bio-Soft employees killing one another for no reason, and actually had nothing to do with the chips whatsoever. This scene also has nothing to do with the rest of the movie whatsoever, but I thought I'd let you know how that all came together.


Freaked out by Janet's lack of control - although not particularly bothered by John's death - Clara, Carter, and Barry lock themselves in a room away from her. While she's on her own, however, Janet discovers a computer that seems to be linked to a tracking device. Despite having no special background that would make her adept at using intricate homing mechanisms and having uncontrollable strength that would most likely cause her to grind the keyboard and mouse to powder within seconds, Janet quickly deduces that her son is being held captive in the basement. It's a good thing the tracking program was configured to locate that one person within this very building. Talk about handy! 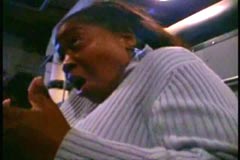 'Kay.Although Barry is dead-set against being in the same room with Janet (which is an example of his super-intelligence, I guess), Carter uses his power of mood& stuff& to convince him and Clara to help Janet find her son. As luck would have it, the nurse not only left them unattended, but also left every door in the building unlocked, so the four remaining test subjects have no problem using their mighty powers to walk down to the basement and just go from room to room until they eventually find Markus through trial and error. A wee bit anticlimactic, wouldn't you say?

As it turns out, Markus is not alone. He was being held in a room with a bunch of other abductees, all of whom were implanted with chips against their will, some with more success than others. Some of these people are basically invalids who can do nothing but swat at the invisible butterflies in the air. But there are enough of them who are aware of their surroundings that it's kind of hard to believe they hadn't already escaped before the Farcical Four showed up. I mean, the room they were trapped in actually has a door to the outside. Sure, it's a locked door, but even if none of them had a functioning power chip, you'd have to think that they could break it down with sheer weight of numbers. As it is, Barry starts to use his amazing brain powers to pick the lock, but Janet just pushes him out of the way and kicks the damn door down, denying him his one chance to actually do something with that chip of his.