The four test subject escape the facility (which they had entered of their own free will and where they were being paid to stay) with the abductees right behind them. Before they can get too far, though, Steve and his Bio-Soft buddies show up, armed to the teeth and ready to murder every last one of them in order to stop them from sharing the secret that Bio-Soft kidnaps people. Not to point out the obvious, but they probably could have avoided this whole mess if they didn't, you know, kidnap people. 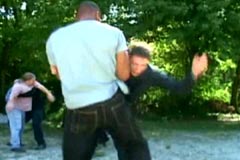 Oh, whatever.A fight scene breaks out, but it is so incredibly lame that I don't have the words to describe it. Instead, I'll use this space to issue an apology to every movie that I have ever accused of having the worst fight sequence ever. Chip Factor has shown me the error of my judgmental ways. To give you an idea of how bad and confusing this scene is, here are three examples:

1. Janet, the one with super strength, doesn't actually fight anyone.

2. Sam and Medina, two Bio-Soft agents, beat up each other, which ends with Medina "trapping" Sam in the very room where the abductees had been held - a room that now has two open doors.


3. Medina shoots Steve with a lens flare, then kills him by throwing him off a bridge. Her motivations for doing any of this are entirely unknown. 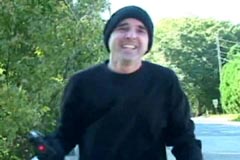 "All I ever wanted was for black people to like me! And look what happened!"With the lead bad guy dispatched at the hands of& a lesser bad guy, Janet, Markus, Barry, and Clara walk off into the sunset. None of them even bother to look for Carter. As it turns out, Carter is busy trying to rally the abductees to overcome the effects of the chips in their systems by using the power of their minds. The stupidity of someone using the mood-affecting mental powers of a chip to try to convince people to use the power of their minds to overcome the effects of chips that make their minds more powerful is either lost on Michael K. Harris, or the brilliance of this movie is lost on me. It's definitely one of the two. In any event, the abductees decide that listening to Carter drone on and on is more than they are prepared to deal with, and they proceed to beat him within an inch of his life. Luckily, right before they finish him off, they all suddenly stop what they are doing and wander off together. How could such a thing happen, you might wonder? Let's find out!

It pains me to no end to say this, but it was John, of all people who saved the day. You see, he wasn't actually dead. He was just playing dead for no good reason, allowing his girlfriend to think he had been killed and allowing Janet to think she was a murderer. Then he used the computer with the homing device to send a signal to all of the abductees, causing them to go wander off somewhere. See, because he's super-smart. Throwing his arm around Carter, John leads him off, quipping a stream of faux-intelligent one-liners to end the movie, including, "Let's hit some bar trivia before this thing wears off," and "All I know is, they didn't pay me enough for this shit."

I am forced to point out that they did not, in fact, pay him at all. They happily would have, if he hadn't just ruined the whole company. God fucking dammit, John.

Oh! And somewhere along the line there was a completely pointless scene featuring Professor Griff playing someone with the power to help Bio-Soft's chips get patents more quickly. He decides not to help, because he is black, and Steve is a jerk. So, there's that.

Let me say a few nice things about this movie before I express my undying hatred for it. The acting in Chip Factor is not that bad, although it does get steadily worse as the movie progresses. Also, one of the added bonuses of having Professor Griff onboard is the use of some genuinely good music. Sadly, the sound quality in this movie is awful, but if it wasn't it would have a rockin' soundtrack.

Okay, now that that is over with, I have one overriding question: what the fuck? Or, taken as several smaller questions: why was Bio-Soft kidnapping people when they were turning away willing volunteers? What happened to the nurse? What was up with Medina? Why did John feel it necessary to play dead? Why couldn't Bio-Soft get legitimate funding for their amazing product? Who was that person who broke into Steve's house, and what was on the disc they stole? Who the hell gave Michael K. Harris a camera? I could go on and on.


Chip Factor is a movie of such staging idiocy that I'm having difficulty processing the depth of its failure all at once. Michael K. Harris seems physically incapable of making a good decision, to the point that even when he tries to do something right, it gets twisted into a perverted mockery of decent filmmaking. His every word is a hideous deception thinly disguised as an actual human thought. I've encountered filmmakers that have made me angry, I've encountered filmmakers that have made me depressed, but this is the first time that I've encountered a filmmaker who has actually made me afraid.