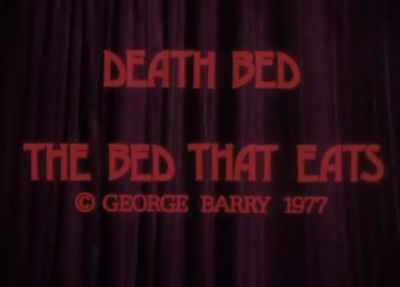 The Case For: This movie is like what would happen if they paid Yoko Ono & Bjork to co-create the world's longest and most cacophonous Fanta commercial.

The Case Against: Death Bed is more pointlessly non-linear than a jumbled-up pile of cuttings played back in random order, less scary than an outdoor 2pm screening of Da Hip Hop Witch, and dumber than a top-secret director's cut of Transformers 2 which is just Shia LeBeouf pretending to jump a muscle car off of a chroma-key ramp naked while stutter-screaming for 4 hours solid. 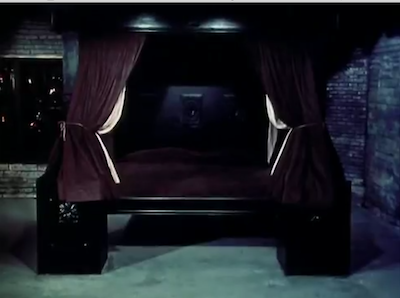 There was actually a pretty good chance we were never going to get to review Death Bed: The Bed That Eats. Not just because it was shot in 1972 and took until 2003 to see the light of release day, mind you. We were actually dead sure that if we ever watched it, Death Bed would be too good to review, because the whole concept of a killer bed is just good enough of a foundation for a campy, half-serious teenage horror romp that it just wouldn't even have been worth it.

As you can surmise from the fact that you're reading this in the column where incredibly obscure and exceptionally bad movies go to be exhumed and painfully dissected, the creators of Death Bed: The Bed that Eats did not manage to hit that fun, lighthearted tone whereby profound stupidity and/or silliness is transformed into damn good entertainment. Quite the contrary, they forcefully sucked all of the fun out of the premise and tried to turn it into some kind of hideous, mangled attempt at pretentious post-New Wave anti-cinema horror camp. When your stoner-caliber wacky monster movie contains named acts complete with cutesy title cards, you know you fucked up somewhere along the line - especially when there's not a single distinguishable goddamn difference between any of those acts. 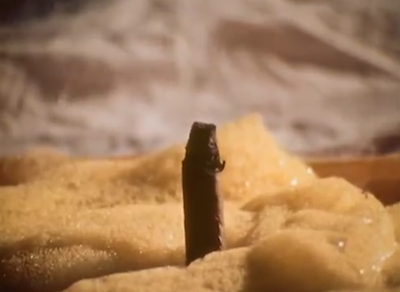 Sometimes a cigar is just a cigar (being digested by the stomach excretions of a demon-possessed murderous bed.)Seriously, we'd love to know what the director's vision was for Death Bed. Did he stumble upon a script written in tongues in a flesh-bound ancient tome that would consume his soul and murder his sweet old granny unless he shot a painful trainwreck of a feature film with it? Did somebody bet him 50 bucks that he couldn't convince anyone to appear in a movie about a killer bed that gives away the entire plot in its own title, and he didn't give a shit about anything beyond that? Or the worst possibility of all, did he actually think this was a legitimate work of art or high-concept parody?

We hope like hell this wasn't supposed to be funny - at least, not the laughing with it kind of funny. Yet the tumor-inducing sound track and bizzare, overblown narration smothering practically every scene like a geriatric Powerball winner in a seedy nursing home do seem to point in the latter direction. At least when Charlie Band churns out the next Death Bong 8: Nightmare Son of Gingerdead Showdown on Nipple Island, he doesn't stop to write his Palme D'Or acceptance speech before moving on to the next one. (Whether or not that's a compliment to him, we'll let you decide).