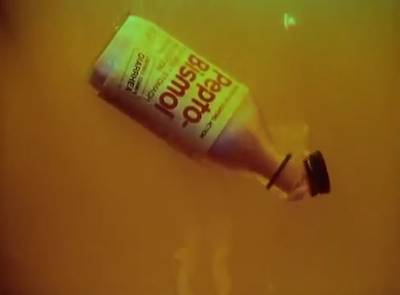 Other activities which the characters in this movie enjoy doing in (death) bed include:

Not trying to shame on their kink or anything, but they'd probably have survived if it didn't take them like 20 goddamn minutes of lying around and doing nothing to get around to the actual 10-second sex part. Just saying.

Okay, so the bed is causing death, we get it, but the real ultimate question is can the Death Bed be killed? Just how the hell does one kill a bed, anyway? Jumping on it a lot, having the dog pee all over it, putting it in Joe Don Baker's house for one night[2]? Creating a race of killer sentient mutant bed bugs to fight back? Our personal suggestion would be to maybe try something involving setting it on fire with the huge, open fireplace that all of the characters constantly use, but that never seems to occur to anyone, especially not the guy who tries to shank it and gets himself a fresh new pair of skele-hands:

In the end, the bed is destroyed in some sort of anti-Satanic ritual involving poorly drawn figure-eights and having sex with a 150-year old zombie woman in the park. Hooray, the world is safe, at least until Arson Stool: The Stool that Burns comes along.

Speaking of which, we have a whole list of great ideas for follow-up premises that you're free to use, as long as your name isn't Charlie Band or David DeCoteau:

Just don't try to make Rape Stove: The Stove that Rapes - that one's been claimed already.

[2] As a side note, this would inevitably lead to a movie we'd much rather see: Joe Don Baker: The Bed-Eating Man.