The real problem with trying to turn Death Bed into a fartsy (but not very artsy) mood piece/psychological WMD is that the lack of comedy just makes all of the vast, abyssal plot points that much more obvious. Like the titular bed's backstory, for example, which involves this: 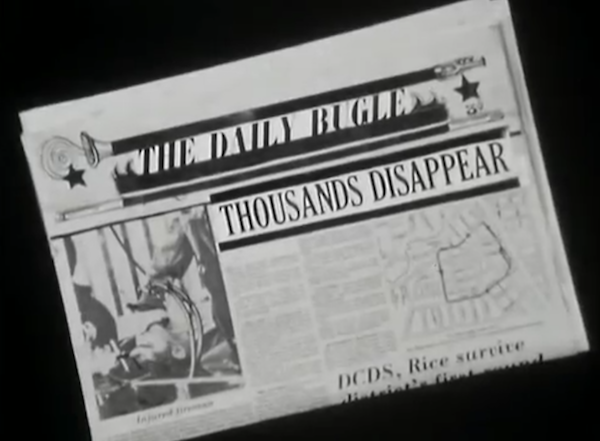 We'd really like to see somebody make the prequel about the serial-killing bed monster that never moves living in Chicago and somehow murdering thousands of people without anyone ever wising up to it. We know this was in the days before Yelp and Google reviews and all, but you'd think people would eventually figure out that they might wanna skip this particular bed & breakfast since it's on the front page of the goddamn newspaper every single day for murdering and eating people.

Even Rambo didn't manage to crank up the kind of killcount this bed supposedly has, and every cannibal in New Guinea/Congo history combined couldn't touch this bed's people-eating resume. That's just ridiculous. No way would a killer sentient man-eating bed be able to pull this shit off IRL. Oh, and speaking of Papua tribesmen, did we mention that the soundtrack sounds like the penis gourd of a transported 15th century witch doctor slapping against the keys of a half-fried flea market synthesizer as he reacts to it with shock and horror for the first time?

Either way, somehow the bed invested wisely and had a tasty enough 401k to eventually retire and move out to a charming dusty old death mansion out in the bucolic countryside of Killhippy County, a mansion which by the way is completely locked at all times except for the convenient attached Hobbit hutch side-entrance which contains a murder bed, a fireplace, and that's about it. Oh, and idiots; lots and lots of idiots.

And yes, before you ask, people can and do casually stroll out of the sinister haunted murder chamber, but - much more bafflingly - they also go back inside, of their own free volition, even after having heard the fucking bed making slurping and chomping noises (and in some cases straight up watching it eat their friends alive). Why, you ask? Well, don't. Just don't. Trust us, it's better for everyone this way[1].

We honestly can't figure out if the bed is supposed to have supernatural hypnotic powers, or if every single victim in this movie is just severely, irreversibly brain dead and/or narcoleptic, and the omnipresent narration doesn't have any useful clues. About anything. As far as we can tell, this movie has about 18 different narrators - none of whom are even remotely coherent at any point - and more random characters than a shelf full of Russian novels - none of whom are even remotely relevant to anything (except being bed food, they're all pretty great at that, honestly).

We're also not sure most people, after just finishing an 8-hour car ride to the countryside in the middle of the day, wouldn't immediately rush to the dank cellar of the nearest abandoned mansion for a powernap in a suspicious-looking four-post bed. Let alone set up a couple chairs and a fucking card table on top of the bed for a friendly game of poker. Yeah...even we had to double-check that we weren't making that last one up:

No, your eyes aren't deceiving you, that late 19th century carnival strongman and Leonard Cohen's ghoulish lobotomized Bulgarian 2nd cousin really did just set up a table and chairs - which we're not sure are even in the room to begin with - on top of a goddamn bed just as a goddamn pretense to get goddamn eaten by a goddamn son of a bitch bed. Supposedly because sitting on a chair on a bed in an empty room next to the house everyone knows you're hiding out in is "the perfect hiding spot."

[1] The fact that we can hear every single character's inner monologue about absolutely nothing at all times for no good reason somehow doesn't help clear any of this up, but it does help give you a squash-splitting migraine and a deep longing for global nuclear holocaust.