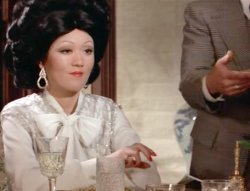 This movie is so bad, the lead actress not only never acted again, she has been wiped from the face of the earth. I am not kidding.The white death machine is led into the local police precinct in cuffs, where the detectives argue over who gets to interrogate him. Finally the stereotypical asshole detective wins out, and he leads the death machine into a questioning room, where the death machine begins doubling over and groaning. "Take off his handcuffs!" the detective says, because police procedure regarding captured kung fu assassins is to unshackle them at the first sign of trouble. The death machine immediately flips out and essentially beats up the entire police precinct in a flurry of poor jump kicks, not counting the three or four cops who manage to get shot by other inept cops when they get in the way of someone's gun, then escapes through the window and gets away on foot. The death machine soon finds himself in a diner, where the old couple that owns the place decide that a bloody, out of breath man with a handcuff hanging from one arm is just the sort of person who most needs Jesus, and they give him a free meal while showering him with Jack Chick pamphlets. As the death machines eats his cheeseburger, a biker gang invades the diner and begin doing what bikers do: namely, hassle everyone and generally be a total asshole for no apparent reason. One of the senior bikers begins shouting at the death machine, who ignores the biker and keeps eating his cheeseburger. Upset that his repeated shouts of "hey, man" have gone unanswered, the fat, balding biker gets in the death machine's face, who immediately flips out again. Unfortunately this time his martial arts slaughter is cut short when a biker throws a chair at his head, knocking him unconscious. You don't learn that in cop school, I guess.

Before the bikers can beat the crap out of the fallen death machine, his two compatriots magically appear in the doorway and flail at all the bikers until they are all defeated. After returning to the mansion with the white death machine, the three immediately leave again to take out the bank VP. However, instead of finding the banker, they burst in on his angelic virginal college coed daughter, knocking her down and taking pictures of her. The fu manchu assistant then takes these photos to the bank VP, ordering him to resign and move to another town. I guess when the crime lord ordered him "killed" there was some wiggle room involved in just what that meant, but whatever. The VP decides that his daughter was kind of a pill anyway and refuses to be bullied by an evil crime syndicate, resulting in the assistant handcuffing him to a file cabinet and pulling a time bomb out of a basket. After setting the time bomb, which appears to be made out of a hollowed-out red Buddha, the assistant locks the main door then exits via a side entrance, leaving the banker to scream and flail around and try and reach the bomb for literally two and a half minutes before it finally, mercifully explodes.

Now that the death machines have accomplished their mission, I guess there's nothing more for the movie to do! Except follow the life and times of Frank, one-handed stick in the mud wimp, whom we rejoin wandering around the dojo, still sticky with blood and covered in chalk outlines of bodies. Again my theory that the police don't particularly care about catching the murderers holds water since no one seems to be around or caring that Frank is disturbing a crime scene. As he mopes around and thinks back to that horrible experience where Mr. Right left him forever, the nurse from the hospital wanders in after him. She starts talking him up, mentioning that she tried to see him at the second hospital he was transferred to, but he won't have it. "YOU DON'T KNOW HOW IT IS FOR ME," he whines pathetically to a woman who works in a hospital and sees people that are a million times worse off than him every day. I think that the nurse must have peeked down his gown and liked what she saw because she refuses to give up on Frank. "Why would you even want to try?" Frank asks. "I don't know," the nurse replies. "Maybe by the time I get used to you, you'll be used to yourself." Maybe she has a condition where she mistakes pitiful pathos for raw animal sexuality.

To celebrate their newfound love of some sort, Frank takes her to his workplace, which turns out to be a run down titty bar. While Frank somehow moves heavy boxes despite only having one hand, a old white-bearded drunk grouses about life and eventually blows his top when a jukebox won't work, allowing Frank to heroically try and save the nurse, but instead get a pool cue cracked over his head, and then the Hemingway-esque ancient withered man lays out Frank with one punch before leaving. The nurse runs over and cradles Frank as he lies on the bar in a haze of tears and self-pity, and this is so overwhelmingly erotic that the very next scene shows the two lovebirds in a post-coital afterglow, where Frank keeps moping, maybe because he wasn't able to get it up without his right hand, if you know what I mean. The nurse tells Frank they should get away from it all for a few days and he agrees to take her to the ocean, probably for more of his special brand of complaining and emotional distancing.

As the two set out for the coast, they happen to drive by a car packed full of the death machines, who are going to kill the crime lord for some reason. Suddenly all of Frank's unrepressed frustration and anger bubble up to where they were already. He pulls over to the side of the road, seething with wussy retributive fury. He tells the nurse to get out and call the cops, then takes off after the death machines, presumably to kill them or something, despite the fact that one of the three managed to dismember him while the other two were occupied, and then later an old man laid him out with a single punch. Luckily Frank thinks better and merely sneaks after the death machines after they stop their car at the airfield, where the crime lord is flying in to deliver the payment for the assassinations. The crime lord gets out of the small private plane with a briefcase full of cash, gives it to the men, then hops back in, and as the plane is taxiing around the runway to take off again the death machines slowly and deliberately assemble their RPG launcher and blow the plane and its passengers to hell. That will teach the crime lord to pay the evil syndicate for services rendered! He'll never do that again!

Frank follows the death machines back to the mansion, where the wig woman meets them and tells her assistant that he can "take care" of the death machines now, since I guess they were trained and selected for the sole purpose of killing two inconsequential and defenseless local schlubs. The assistant nods and takes out the smallest derringer pistol I have ever seen, then heads upstairs where three gunshots are heard. Surely the death machines, who have repeatedly shown they are impervious to gunfire, are dead! Frank hears the gunshots and decides to head inside to see what he can find, because that is the most logical course of action. Once inside he immediately heads upstairs, where the wig woman bursts out of her bedroom with a sword and chases Frank back outside just in time for the cops to arrive and shoot her dead. Upon searching the house the cops find that the three death machines are gone, finally having attained the freedom they so desperately sought, as evidenced by the black one preventing the Asian woman from slapping him and then having sex with her. The movie ends with the three death machines about to board a plane, ready to, I don't know, continue killing indiscriminately, or maybe seeing if they can get a nice retail job. "Death Machine" looks good on a resumé.