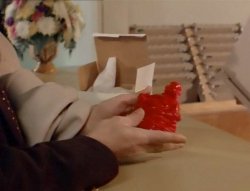 The detectives can't believe it's not Buddha.Next, the scene shifts to the second assassin, who has tracked his bounty to a local park where the bank VP is going for his daily jog. The assassin pulls up in his car, then pops the trunk and pulls out a giant sniper rifle, making no attempt to hide it despite being in an exposed public place. As he steadies the rifle and aims it at the jogger, the death machines drive up behind him, where they too pop their trunk and pull out a giant rocket-propelled grenade launcher, which makes the sniper rifle look as innocent as a stick of gum by comparison. Just as the assassin is about to take out the bank VP, the black death machine fires the RPG, blowing the shit out of the car and the assassin. They probably could have walked over and karate chopped him to death or something, but I guess the evil organization's munitions budget is a use-it-or-lose-it sort of system.

Now that the evil death machines have saved two innocent people from being murdered, the real mayhem begins. The president of the hitman company calls up the crime lord from a payphone to explain that both of his hitmen have been mysteriously killed in the line of duty. As the crime lord berates him, the hitman CEO fails to notice a bulldozer slowly driving towards him until the last possible moment, when there's little he can do but turn around and scream and flail his arms for a few seconds as the shot cuts away because the movie doesn't have the budget to destroy a phone booth. The crime lord, hearing screaming and crunching on the other end of the line, begins to wonder if something odd is going on. "Hello? Hello? Are you there?" he asks, then taps the hook a few times just in case the sounds of entrails being flattened by a Caterpillar tread was actually just a bad relay. Finally he hangs up in consternation and the phone immediately rings. He picks up again and it's the Asian woman, wig and all. "Veldt jynx grimps waqf zho buck," she says, or roughly translated to a human dialect, "all contract killings in this city are under my control." Turns out the plan all along was to eliminate all the competition so the evil organization could run the show, a strategy similar to that of Wal-Mart.

I guess the crime lord decides this is perfectly fair as far as he can tell because he immediately gets on a plane and flies into town to meet with the evil organization and make sure they are a trustworthy and upstanding institution of murder. After his tiny Cessna lands and his driver takes him to a secluded mansion to meet with the Asian wig woman, he tells his driver to go to a nearby restaurant and wait for his call. "Don't you want me to come in with you?" the driver asks, but the crime lord is positive that there's no danger in meeting with a gang of assassins who already killed two of his hirelings in cold blood.

As the crime lord and the wig woman sit down to discuss matters over dinner, the scene shifts to the restaurant where the driver is apparently an old friend of the embarrassingly Italian proprietor. "Mamma mia!" the mustachioed restaurateur shouts, seating the driver in a booth and fawning over him like a tanooki suit. "I-a make-a you a nice-a plate-a spaghetti-a!" He bustles off to the kitchen and soon the driver is served a big heaping plate, which he digs into, before finding a big red Buddha statue hidden under the noodles. He calls Tony or Luigi or whatever the owner is named over and complains, making Luigi slap his cheeks with indignation and resolve to fire whoever did this immediately. As the fuming driver sips his drink, suddenly a pair of headlights flick on outside the restaurant window! Amazingly, the driver notices the truck barreling down on him in time and manages to dive out of the way before it comes crashing through the wall of the restaurant. The driver escapes out the back door where the Asian death machine is slowly twirling a sword, waiting for him. The driver is in no mood for games and shoots the death machine, who falls down but immediately stands back up, continuing to swing his sword in a circle, when the driver shoots him again. This keeps going on again and again until the driver runs out of bullets and is set upon by the death machines, who return to the house and deliver his head in a basket to the crime lord. The crime lord is so furious to see that an anonymous underling has been killed that he immediately pulls out a gun and shoots a nearby waiter, whose wine bottle explodes as the bullet conveniently passes right through it. Having thus dispelled his rage, the crime lord immediately calms down and passes along the vitals about the two targets he needs eliminated. 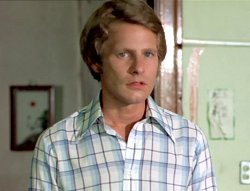 HELLO LADIES.The scene moves to the karate dojo, where a group of students punch the air for a while until the marked-for-death instructor tells them to stop. One student in particular keeps lingering in the camera frame, suggesting he might be more central to the plot than the other expendable karate idiots. The karate instructor addresses the class while holding up a red Buddha statue, asking if it belongs to anyone. When no one answers, he exclaims that he just might keep it. In case you haven't figured it out yet, the red Buddha statue is the calling card of the death machines, who enjoy giving big obvious knick-knacks to their targets BEFORE they hit them, possibly to get the media excited and earn themselves nicknames like, uh, "the Red Buddha Killers" or something. In any event, the death machines immediately burst through the window, slaughtering everyone left and right with their ninja swords. Amazingly, the death machines have mastered the art of killing without actually having to have the sword penetrate the human body, or leave any sort of visible wound or blood, or make any sort of cutting noise whatsoever, or in fact anything that would suggest that they were doing anything more than running around pretending to kill people with swords. The karate students ineffectually fight back, but this must be one of those crooked McDojos because the death machines shrug off their attacks like fake swords off a karate uniform. In fact, the only student with any visible wound is the one that the camera loved not long before, and when he engages the death machine he immediately gets his hand cut off and collapses, setting up a running theme of getting his ass kicked that will continue throughout the film.

The next morning the cops arrive and tally the grisly scene, where they discover that Frank Thomas, the handless wonder, is in fact still alive, and they cart him off to the hospital to recuperate. In the hospital, two detectives visit Frank. "I've only got one question," a detective says. "Could you identify the men who did this?" Frank says he could, and the detectives immediately leave without asking who the men were or what they looked like or anything. I think the detectives didn't actually care but they just liked the warm fuzzy feeling of knowing there actually was a witness who could theoretically identify the killers if they ever happened to catch them. After the detectives leave, a nurse tells them that a package has come for Frank with no return address. Opening the small box, the detectives find a small red Buddha statue inside! Could this possibly mean something, like the last two Buddha statues sent to men who were immediately murdered? As the detectives ponder this, a pretty young nurse flirts with the bedridden Frank, who responds by moaning and groaning and feeling sorry for himself and generally being a little bitch.

That night, the death machines infiltrate the hospital to take out the witness to their murders. Disguising themselves as a mixed-race cadre of doctors, they walk up to Frank's room, where they karate-kick the guard and burst through the door, stabbing the lump in the bed hidden beneath the sheets and then exiting before determining if the lump was in fact a human being or maybe, say, some cleverly arranged pillows. While trying to leave, a policeman spots them, and as the black and Asian death machines dive out a window, the white death machine is shot from behind. He slowly gets up and turns to face the cop, then shuffles towards him while the cop reaims and shoots the white death machine a second time. The death machine gets up and is shot again, and gets up and is shot again, until after the sixth or seventh shot the cop gets bored and shoots the death machine in the head, which makes him start screaming and, I assume, fall down at some later point after the movie has cut away.

Back at the evil mansion, the wig woman's assistant informs her that the death machines have not only failed to kill the target, but one of them was captured. This so enrages the woman that she slaps her assistant, who pretends to be so utterly devastated by the limp-wristed smack that he staggers back and holds his cheek in a state of shock and pain. She then walks over to the death machines and attempts to slap the black one, who grabs her wrist before she can follow through. I think this is supposed to be setting up a strain of insubordination and free will in the death machines, or maybe he didn't feel like putting up with her shit. Later the woman goes up to her bedroom, where the black death machine is waiting for her in his undershirt. "Mimsy borogove mome raths outgrabe (you are forbidden to enter here)!" she proclaims, and is met with stony silence. Somehow satisfied, she then snuffs the candle and the scene ends. As near as I can tell, the movie is insinuating that they have sex, but I don't understand why or what it has to do with anything, unless the Asian woman was just working through a bout of jungle fever.