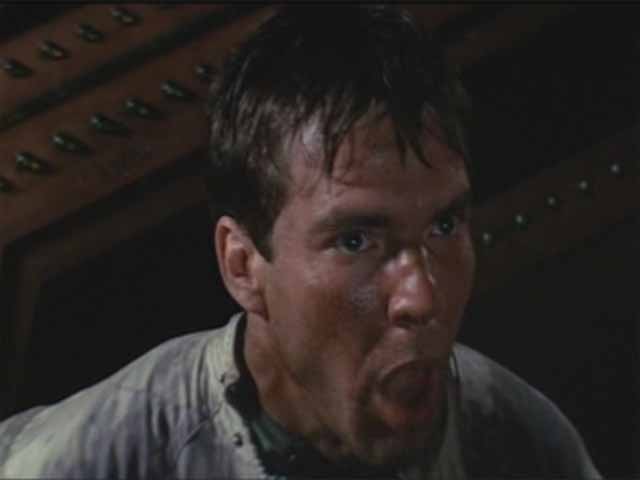 Wait, why is this movie still going? Aren't both protagonists dead? Oh okay, it wanted to pay its respects to Davidge so we're back up at the dumb toy space station hanging out in the morgue, which in the future seems to consist of a conveyor belt, a wreath dispenser, and a Lucy-esque cadaver assembly line. The bodies are dropped through the conveyor and fired into space with a brief musical fanfare, except for the agnostic guy, who just gets flushed unceremoniously, that ambiguous fuck:

We can only assume that the atheist casualties are dumped into ziploc bags upside-down and blown out the trash hatch to the dulcet tones of the tuba of failure. Sadly, instead of blasting Quaid's lifeless corpse into the ass-end of space like a good mortician, one of them tries to gank his retarded Drac Shizmar bible-necklace thing, which magically snaps him out of being dead and back into strangle-mode in about 2.6 seconds. The brass figure he should probably get a medical workup what with the whole miraculous/spontaneous resurrection thing, so they cram him in what looks like an MRI machine glued to a Honda assembly line, and in no time he's back on his feet, tragically minus one luxurious hobo beard. We hope he at least kept all of the beard hairs as a memento of his time living in filth on an alien hellhole.

Speaking of alien hellholes, what better way to thank whatever sissy life-loving god of choice for reaching into the abyss and pulling your soul back across the impermeable threshold of death than a good old-fashioned rampage? One easiest spaceship theft in movie history later (which requires both a long walk down a corridor and battling through some timid radio complaints from the control tower), Davidge flies right back to the miners' ship, but don't worry, this time he's prepared - he has a clean uniform! Yes, that's all he brought with him to make the difference this time around. Not a laser gun or a grenade launcher or anything that might actually be useful, just a nice crisp set of dress-whites to make him easier to spot than a 30 pound tumor. 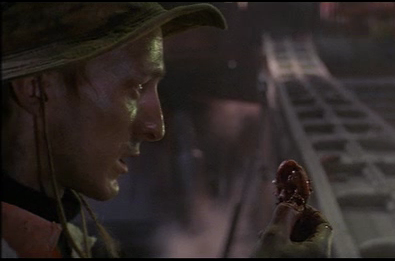 "Great, now we're all going to have to sit through a four-hour meeting on safety in the workplace."Fortunately the miners are somehow even less prepared than he is, and he quickly dispatches the first guard he sees by throwing him into a mining corkscrew. He shanks a second guard and steals his leather trenchcoat, fedora, and machine gun so he can successfully infiltrate the Sturmfuehrer Dick Tracy convention (already in progress). Once inside, stage 2 of his ingenious plan is throwing his gun off to the side just in time to get captured by some more guards, this time lead by evil head miner Bonesaw Jr. Just like every other bad guy ever, Bonesaw Jr. decides that actually shooting anyone with the gun he carries around is beneath him, so some Wile E. Coyote-esque villainy ensues involving a conveyor belt and lots of oversized Temple of Doom-style mine carts.

At the last moment, an angry and frankly lethargic mob of Drac slaves shows up and throws Bonesaw Jr. to a gooey demise in a vat of boiling space-cola. Then some of Davidge's buddies from the space station show up to throw a lever and stop the conveyor belt of doom. Oh, did we not mention that the other humans showed up? Maybe it slipped our mind because they, you know, didn't help at all. Really, guys, thanks for coming out and everything, but we're betting one of the fifty slaves who spent every waking hour of their lives operating this equipment could have figured that lever out without the brave humans intervening.

For the most part, Enemy Mine isn't your typical movie on this list of reviews. The acting is good for sci-fi B-movie, and you've gotta give it some brownie points for Dennis Quaid's virtuoso facializing. There's a real musical score with an honest-to-God orchestra, and there are no schizophrenic hillbillies dubbing over every line in a foreign language. But some of the dialogue is pretty bizarre, and some of the plot seems to go in a huge, pointless circle, like that whole death and resurrection arc. We could sit here nitpicking all the little details, but at the end of the day, this is hands-down the best movie you'll ever see about a space fighter pilot befriending a pregnant hermaphroditic alien lizard-frog, and that's a guarantee.