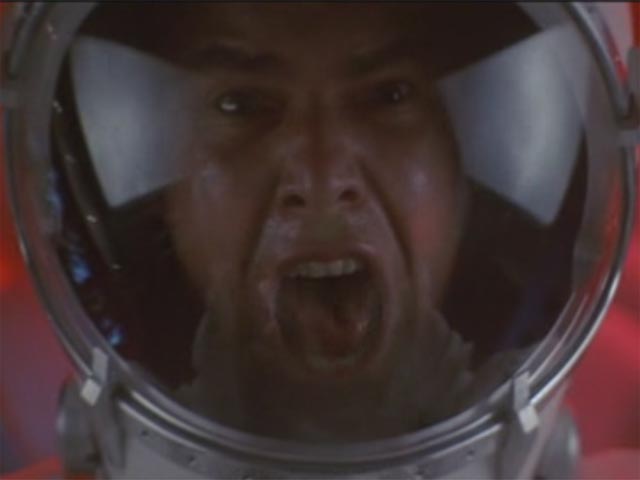 Putting all of that nasty "attempted murder" business behind them in a hurry, Davidge and his new lizardy chum "Jerry" set about the mean business of surviving in a harsh alien wilderness. First, they need a source of food, which is provided in spades by hunting some kind of weird beetle-ish thing that looks like a Roomba with mutilated whale genitals draped over it. Second, they need shelter, which Davidge provides by leaning a bunch of logs and beetle shells together to make a backyard clubhouse that makes those little pillow forts you used to throw together in the living room look like The Alamo. Meanwhile, Jerry reveals that he has somehow managed to learn taxi driver-level English, which leads to some pretty amazing conversations:

So Jerry and Davidge instantly go from mortal enemies to best bros, and you already know where this is all going - to support the thinly-veiled racial allegory this movie is trying to cram down our throats like an elbow-deep upper endoscopy from a Russian heavyweight boxer. They hang around the campfire doing nice tantric readings of the Hello Kitty! Sanrio and Friends All-Purpose Non-Denominational Space Bible(TM) and totally not kissing each other and squeezing each other's muscles or anything. And what better way to celebrate newfound spiritual one-ness than with some fireworks? The deadly meteoric kind of fireworks. Against all odds/reason, their pile of beetle shells deflects the biblical hellstorm of flaming rocks, and Davidge decides this is an ideal time to accuse Jerry of being fat, which somehow leads into a raging debate about which race is actually trying to conquer the galaxy and enslave the other, and they fall asleep trying to strangle each other to death. All of this happens in about a minute flat, by the way. If there's one thing that this movie does consistently, it's shifting moods so abruptly that you could probably sue Wolfgang Petersen for whiplash. 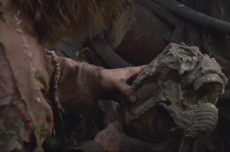 Alas, poor *Snrrrrrchhhhh*, I knew him, Jerry! A fellow of infinite skghskrarrrrrlmawwww.The next morning, Davidge cools off with a nice death march to the middle of nowhere, accompanied by a majestic musical soundtrack which would really only be appropriate for crowning the King of England or finding out that it was Earth all along. He stumbles across a bunch of litter on a mountainside, including Drac skulls, steaming pipes, and empty cans of Space Pepsi, all of which apparently belong to some outlaw space miners/slavers. Instead of trying to hitch a ride off this nightmarish deathplanet, Davidge decides to go back to hanging out in his beetle teepee, where Jerry greets him with the joyous news that he's pregnant.

If you didn't just choke on your drink, then you probably skimmed that last paragraph, so let's try this again: Jerry is pregnant. Or, as he tells it: "I am not fat...I am not lazy...Dawidge, I await a new liffffe," opening his coat to reveal his glowing gutful of prenatal joy. He also says something about Dracs just getting pregnant "when the time comes," which we think means they reproduce asexually and absolutely refuse to interpret in any other way. All things considered, the D-Man takes the news pretty well, and before you know it our hero and his pregnant alien beetle-bro are roughing it for three. Like any good knocked-up mother-father, grizzled veteran soldier Jerry starts making pigeon noises to himself and knitting tiny burlap suspenders for his future daughter/son.

And with that to ponder, Jerry announces that "Zamis...is coming", and the whimsical birth scene finally begins. There's really no way to do this scene justice with words, so here it is:

By the way, this seems like as good a time as any to stop and reflect on the fact that Wolfgang Petersen made this movie after directing both Das Boot and The Neverending Story. Just drink that in for a minute or two while that last scene gets good and repressed. 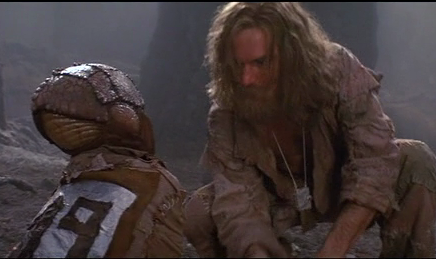 Remembering something about fresh air and exercise being good for children-type things, he takes Zamis on a nice hike/montage around the entire planet and every crappy set we've already seen for 10 fucking years. Unfortunately for Zamis, being raised by a crazy idiot hermit who's spent the last 10 years squatting in a beetle-ass shanty in the swamp muttering to himself does not grant much in the way of street smarts, so he gets himself kidnapped by the evil Space Pepsi miners, who are back because their Mountain Dew Livewire tanks ran empty and they need to siphon more out of the bubbling orange pools this planet is covered in.

Being the heartless corporate bastards they are, the core mission statement of the Pepsi Presents the SS Space Schooner Amistad #2 - Slave Ship Boogaloo seems to involve a lot of speciesism, enslavement, and whipping-related motivational techniques. Needless to say, crazy hobo Cpt. Oncle Dadvidge isn't too happy about all that, and so, after scoping out the situation out with his handy SPACE BINOCULARS - which are exactly like regular binoculars except they have a set of crosshairs up in the corner for no fucking reason - he springs into action, rushing to save the day with his trusty DIY Daddy's First bow and arrow, heroically rescuing his gross squishy nephew and living happily ever after in a utopia of friendship and egalitarian idealism getting himself shot and falling over dead. The end.